Now the world’s best, Ryu sets her sights even higher

Now the world’s best, Ryu sets her sights even higher 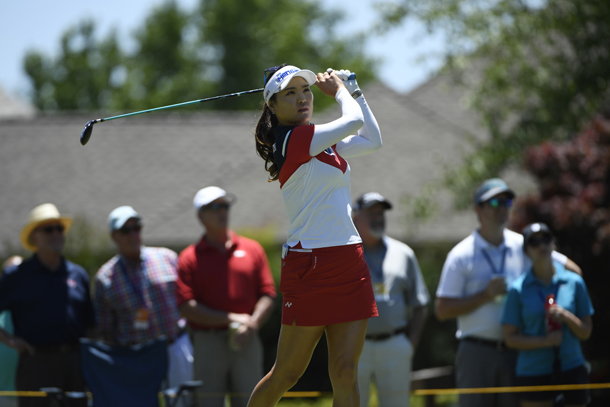 Ryu So-yeon watches her teeshot during the Walmart NW Arkansas Championship Presented by P&G in Rogers, Arkansas on June. [AP/YONHAP]

Sometimes you can spot a hole in one the moment the ball leaves the tee.

During the 2006 Asian Games in Doha, Qatar, a 16-year-old girl surprised the world by winning gold medals in both individual and team events with a course record of 29 under par. 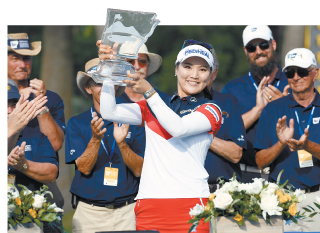 With a win at the Walmart Arkansas Championship on the LPGA Tour at Pinnacle Country Club in Rogers, Arkansas, Ryu So-yeon becomes the world’s top female player. [AP/YONHAP]

Ryu So-yeon became an ace player on the national team, turned pro on the KLPGA Tour in 2008, won her first tournament at Sports Seoul-KYJ Golf Open and, after taking seven KLPGA tournaments, Ryu won the U.S. Women’s Open in 2011, which she played under invitation.

With a major LPGA Tour victory, Ryu started playing on the LPGA Tour in 2012 and added two more victories from each tour until 2016.

This season, she’s at her peak. With a victory at Walmart NW Arkansas Championship in June, Ryu became the 11th player to be the world’s top ranked female golfer, the third Korean player in history, and the first golfer to be the LPGA Tour’s multi-winner this season.

“The moment I dreamed of since I first grabbed my clubs has finally come true,” Ryu said. “I’ll never be able to forget that moment.”

Adding to her success, the Women’s Sport Foundation announced Ryu, the No. 1 female golfer in the world, as one of ten candidates for Sportswoman of the Year on Thursday.

Only four golfers, Juli Inkster of the United States, Annika Sorenstam of Sweden, Lorena Ochoa of Mexico and Yani Tseng of Taiwan have won the award, and among female Korean athletes, Kim Yuna is the only one to win the award in 2010.

The Sportswoman of the Year will be selected based on 50 percent of fan votes, while the other 50 percent will be based on the foundation’s Awards Committee votes. The winner will be announced on Oct. 18 in New York City.

“I feel greater responsibility when I represent Korea,” Ryu said. “Rather than playing for myself, I feel like I’m playing for the people cheering for me. And I think that’s why I get better results in team events.”

Indeed, Ryu won the 2006 Asian Games and served as captain for the 2016 LPGA UL International Crown.

Looking at her success this season, she appears to be following in the footsteps of Park In-bee, the LPGA Tour’s hall of famer, winning major tournaments and now becoming the world’s top female golfer.

“Since I’ve closely known In-bee even when she was the No. 1 golfer,” Ryu said, “I am well aware of the responsibilities and how difficult a thing it is to be in that spot.”

Ryu’s friendship with Park has been a great motivator for both of them, as they have to compete against each other every week, but at the same time, learn from each other.

Both Park and Ryu started their LPGA Tour victories by taking first place at the U.S. Women’s Open, the most prestigious tournament on the tour.

But the difference is, Ryu never had a slump and has consistently finished in the top ten of the LPGA’s money list every season, whereas Park struggled for three years after winning the U.S. Women’s Open in 2008.

But despite it all, Ryu is still not satisfied with her accomplishments.

“My next goal is to maintain the top spot for as long as I can,” Ryu said. “To do so, I have to keep on improving.”

By finishing tied for third at the U.S. Women’s Open in July, Ryu extended her lead in the world ranking with Ariya Jutanugarn of Thailand, who is ranked second.

But rather than thinking about points, Ryu tries to only think about her game.

“I try not to look at the leaderboard because rather than comparing myself with other players,” she said, “I just want to solely focus and enjoy my round.”

This year marks the first year she has won more than one tournament in a single season since her LPGA Tour debut in 2012, putting herself even closer to fulfilling her personal goal of winning three tournaments.