Paik Seung-ho, a promising Korean midfielder who has been playing with FC Barcelona, signed a three-year deal with Girona FC on Monday and will start this season in the club’s third-tier Segunda Division B team. 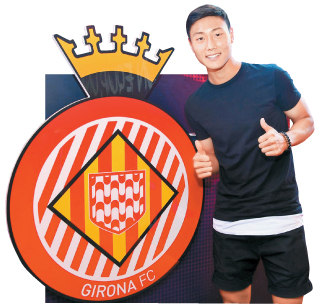 Midfielder Paik Seung-ho stands next to the emblem of Girona FC, his new club, on Monday. [YONHAP]

The 20-year-old Seoul native had a year remaining on his FC Barcelona contract, but it was terminated under mutual consent so no transfer fee was paid. His new club, Girona FC, was founded in 1930 and recently promoted to the top Spanish league, La Liga, after the most recent season. Since the city of Girona is located just 100 kilometers (60 miles) north of Barcelona, Paik should have little trouble adjusting to the weather and playing style in his new home.

But Paik will be starting off in Girona FC’s C-side team. His decision to leave a prestigious outfit like FC Barcelona, where he was playing for the B-division team, for the third-tier team in Girona was made in hopes of more playing time. Among the three Koreans that used to play in FC Barcelona B, Park was the only one to play full time for two seasons. Even then, he was only called in for two matches, and his total playing time was a mere 16 minutes.

Since FC Barcelona is considered the most competitive team in the league, Paik was given very little opportunity to prove his ability. Rather than grinding his teeth there, Paik chose to gain more experience at a less prestigious team with hopes of going big later in his career. 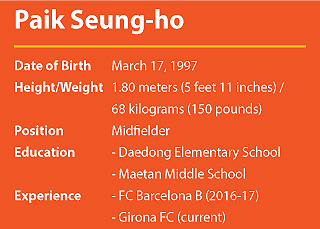 With such little playing time in Barcelona, Paik’s most notable performances have been with Team Korea in the U-20 World Cup. Along with his Barcelona teammate Lee Seung-woo, the two led the U-20 team to a second-place finish in group matches and helped Korea become the first team to advance to the round of 16.

Although Korea made an early exit from the round, losing to Portugal 3-1, Paik and Lee managed to hold the attention of local fans and scouts from European leagues. Throughout the U-20 World Cup, Paik managed to score three goals for Korea.

With Paik in Girona, Lee remains the only Korean in FC Barcelona. His compatriot Jang Gyeol-hee left in July for a three-year deal with Asteras Tripoli FC in Greece. After the U-20 World Cup, Lee began receiving offers from European clubs including Hellas Verona FC of Italy.

At this rate, Lee is likely to make the same move as Paik, transferring to another club for more playing time, and Hellas Verona might just be his best shot. They have one spot left for a non-European player.

The only problem is his contract with Barcelona. The Spanish club has released all the players who failed to get on the starting lineup except for Lee, hoping that they might be able to lend Lee to Hellas Verona after signing another three-year contract.

“Verona first wanted Lee to leave Barcelona completely, but now, they don’t mind taking him as a loan,” a source close to Lee said. “We’re trying our best in making a decision that works best for Lee.”