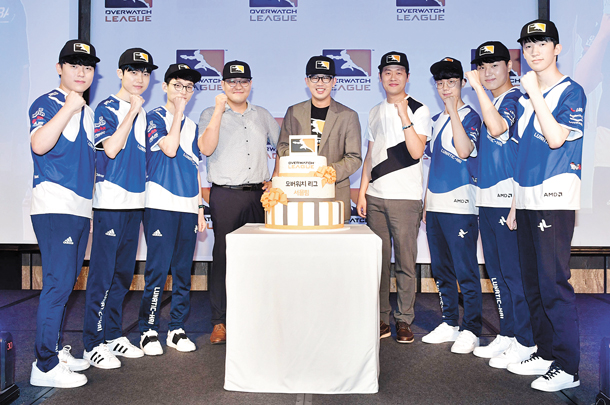 Members of the Overwatch League’s Seoul team with owner Kevin Chou, fifth from left, during a press conference on Tuesday at Gwanghwamun in central Seoul. The team will compete against eight other teams from around the world. [BLIZZARD ENTERTAINMENT]

The preliminary roster for the Overwatch League’s Seoul team is set and - to few people’s surprise - is completely composed of members from the two-time champion team known as Lunatic-Hai.

Overwatch is a multiplayer first-person shooter game from Blizzard Entertainment. The video game publisher announced last year that it would form a professional league for the game with nine teams based in eight cities. The Seoul team is run by Kevin Chou, co-founder of American gaming company Kabam and owner of KSV eSports, which manages some of the top e-sports teams in Korea.

“Our primary goals are to recruit the best players in Korea to our roster and elevate them to compete on the global stage,” Chou said. “We’re teaming the best players, coaches and training programs in Korea with the capital, logistics and data-driven technology of Silicon Valley.”

The group is currently playing their last Overwatch competition, which began on Aug. 11, under the name Lunatic-Hai.

When asked why he picked Lunatic-Hai, Chou said, “I believe a great championship team in any sport really focuses on teamwork. When I talked to a lot of players in Korea, I found many talented players, but it takes a long time and very specific chemistry for a group of talented players to play as a team.

“I was impressed with Lunatic-Hai with their individual talent as well as their teamwork,” Chou added.

The Overwatch League is set to begin sometime in the third quarter of this year, though an exact date hasn’t been set. The full 12-person roster for the Seoul team could be announced as late as Oct. 30. “Kevin and I are working together on this to select the best players who can represent Seoul,” Coach Baek said.