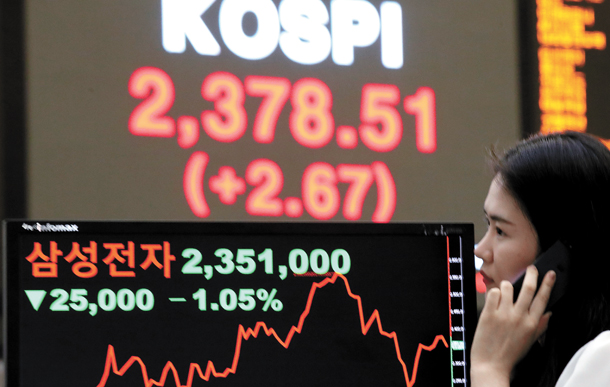 Even on Friday morning, just a few hours before Samsung Group’s de facto leader Lee Jae-yong was sentenced to five years in prison, Samsung workers had not given up the hope that their boss would walk free as they believed there was no direct evidence linking Lee with the bribery charges.

“The situation was unfavorable for Lee but we weren’t expecting such a severe sentence when no direct evidence has been found,” an executive from a Samsung affiliate said.

Following the sentencing, Samsung’s defense council said they will “immediately lodge an appeal.” But it won’t be easy for the electronics maker to avoid a lengthy void in its top management: The appeals process is likely to continue until next year.

Shares of Samsung Electronics dropped by 1.05 percent to 2,351,000 won on Friday, as foreign investors offloaded roughly 46.3 billion won worth of shares following the court’s decision.

After the company was founded in 1938, its owner family has rarely left the management scene. When Chairman Lee Kun-hee was held during an investigation into allegations that he created a slush fund in 2008, his son Lee Jae-yong, then an executive at Samsung Electronics, took the lead and ventured into overseas markets. When the Chairman suffered a heart attack in 2014 and essentially stepped down from his position, the son took on the role of de facto boss of the whole group and was named the new Vice Chairman of Samsung Electronics.

With son and father both gone, Samsung will have to come up with a new strategy to keep the empire safe and growing.

“Lee was arrested six months ago, but being found guilty will send a completely different signal to the market compared with Lee being held at court to determine his guilt or innocence,” said Koo Tae-eon, a lawyer from law firm Tek&Law.

During the last six months Samsung Electronics has continued operations by adopting a two pillar system rather than the normal owner-led leadership.

During the first half of this year, the management committee only held two meetings, two less than during the same period last year.

The other group filling the void left by Lee includes Samsung Venture Investment Corporation, Samsung Strategy and Innovation Center and Samsung Next, formerly Samsung Global Innovation Center. The three organizations were involved in making investment decisions in technology firms at home and abroad.

Thanks to these two groups, alongside the experience of Samsung’s executives and employees, the basic operations of the market bellwether seemed largely unaffected by Lee’s ongoing trial. The new Galaxy Note8 phablet was successfully unveiled in New York on Wednesday and its share prices have been hitting all time highs during the first half of the year.

However, there will be limits to how much long term strategy can be determined without the leadership of the Lee family.

“The management committee makes decisions only for issues that can be handled at the committee level,” a spokesperson from Samsung Electronics said. “For big decisions that can influence the fate of the whole group, the committee hands it over to the board.

But if the board is without Lee it won’t be easy for other board members to make a decision on large issues like when Samsung started investing in the semiconductor business 30 years ago.”

Even with Samsung’s three investment arms, their actions are limited to acquiring technology that the company currently needs but does not have.

Korea’s conglomerates have already experienced the impact of an owners’ void with SK Group’s Chairman Chey Tae-won jailed for embezzlement for over two years, until he was pardoned by then-President Park Geun-hye in Aug. 2015. Chey’s leave dramatically slowed the management decisions at SK Group, according to industry analysts.

However, the situation may be more difficult for Samsung as it scrapped its central planning office, the Future Strategy Office, after it was shown to be behind a series of plans linked to Park’s confidante Choi Soon-sil. Without the central decision making unit, not only Samsung Electronics but also the group may struggle to choose its next step. SK still operates its core decision making unit SK Supex Council.

Samsung is already struggling with its human resources management plans. A group-wide reshuffle of affiliate heads which should have been finished by the end of last year has been pushed back. An executive-level reshuffle between affiliates has also stalled.

Lee’s trial has also caused some of Samsung Group’s businesses to grind to a halt.

In the domestic market, Samsung Securities’ plan to start a new business issuing commercial bonds has been put on hold by the Financial Supervisory Service as the major shareholder is on trial. Samsung BioLogics, a biopharmaceutical arm of Samsung, was planning to expand its production capacity after the construction of its third factory is completed in November; however, discussions have stalled.

In the overseas markets, large investments into foreign firms have been halted after the latest acquisition of Harman International Industries.

“Massive mergers and acquisitions will be unlikely for the time being,” a spokesperson from Samsung said.

Another possible risk Samsung may see from is the possibility of the company being held accountable in the U.S. under the Foreign Corrupt Practices Act (FCPA).

The law strictly prohibits companies from bribing foreign officials or influencing them with personal payments and rewards. The application boundaries include foreign enterprises listed on the U.S. stock market and those that have overseas affiliates there, which include Samsung. The United States is a major market for Samsung Electronics’ televisions and smartphones.