[Sponsored Report] Korean Air focused on helping those in need

[Sponsored Report] Korean Air focused on helping those in need 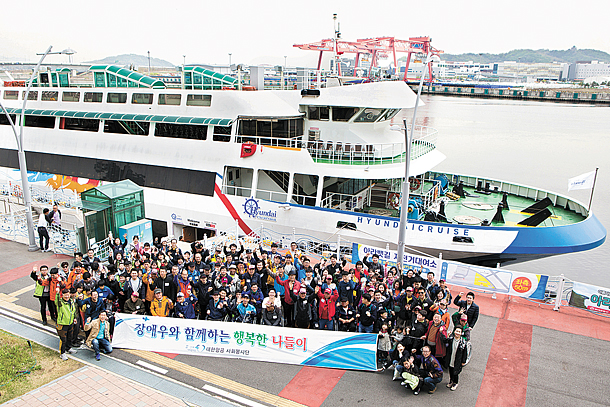 On April 20, Korean Air invited disabled citizens from the Gangseo and Gimpo areas on a cruise tour. [KOREAN AIR]

Executives and staff of Korean Air are conducting a number of activities that focus on giving back to the community, especially focusing on those who are underprivileged. Roughly 4,000 people representing 27 volunteer groups within the company are actively participating in these activities.

Last May, cabin crew members who make up the volunteer group Angels of the Sky received an award from the Community Chest of Korea to recognize its social contribution. Korean Air’s “English Class From Love of the Sky” is one of the most popular talent donation activities. The program started in 2009 and provides elementary school students attending schools near Incheon International Airport with English education, as the majority of the students in the area cannot afford a high-cost extracurricular education.

Teachers in these English classes are employees of Korean Air who are fluent in English and are enthusiastic about donating their time and talent. This year, the program was conducted six times at Yongyou Elementary School from June 7 to July 10. Students had the chance to participate in English story-telling, singing, and cartoon-drawing classes. Through this program, students learn that English is a practical communication tool that allows them to experience various cultures.

Korean Air also hosts annual field trip events for underprivileged children together with the Korea Airports Corporation. Last May, a group of children from Gangseo District in western Seoul and children living in the noisy area near Gimpo International Airport were brought on a trip to experience the culture of South Jeolla, including the Yeosu Airport. Students visited places such as the Suncheon Open Film Location and the Sacheon Aerospace Museum. They also rode rail bikes and marine cable cars.

Furthermore, Korean Air has supported the “Rice of Love” program since 2004 which enables the underprivileged population in Gangseo District to enjoy a happy Chuseok. Moreover, medical service activities are also provided to low-income communities, including foreign workers, to protect them from being exposed to hostile medical conditions.

The 27 volunteer groups at Korean Air take part in activities for the socially isolated by visiting institutions such as orphanages, facilities for the handicapped and sanatoriums.

On April 20, Disabled Persons Day, Korean Air invited the disabled population in the Gangseo and Gimpo areas to go on a cruise tour. Last December, a volunteer group in Korean Air invited the welfare group that they are sponsoring to a Korean Air Jumbos volleyball game. Moreover, last January, Korean Air also participated in the construction of a hall at an orphanage in Indonesia and also in maintenance work for the broken roads and embankments. Along with these activities, diverse events such as making kimchi for the winter with Angels of the Sky and briquette delivery are conducted at the end of every year.

Korean Air’s social contribution activities are not only conducted domestically, but are actively taking place in foreign countries as well. Being a global airline company, it leads from the front during times of difficulty, delivering disaster relief supplies to countries in need. In 2008, when a large earthquake hit Sichuan Province in China, Korean Air deployed a special cargo plane to supply blankets and water. Similarly, during the Fiji cyclone in March 2016 and the Japan Kumamoto earthquakes in April 2016, Korean Air provided emergency transportation to victims.

Outside of these activities, Korean Air is also focusing on improving the environment, especially in China and Mongolia where desertification is taking place. In 2007, Korean Air created a “Korean Air Green Eco Park” in Kubuqi Desert in Inner Mongolia and has continued running projects to plant trees in the region. In addition, staff and executives of Korean Air and local residents in Baganuur, Mongolia are volunteering their time to plant trees. Korean Air’s global planting project is expected to contribute to the prevention of desertification in the area and also functions as erosion control for Korea, China, and Japan.