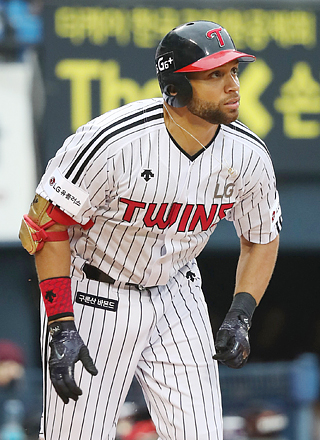 On Tuesday the LG Twins officially announced the voluntary withdrawal of James Loney, an American player who returned to the United States after he was demoted to the Futures League. As competition heats up in the Korea Baseball Organization with the postseason approaching fast, the Twins will likely not be able to fill the gap that Loney leaves.

Loney arrived in Korea on July 18 as a replacement for Luis Jiminez, who had been out of action following an injury on June 3. As Jiminez had been the Twins’ leading batter for the past three seasons, expectations were high that Loney, with a glittering Major League Baseball career behind him, would help the Twins climb up the table before postseason.

When Loney first turned professional he received a lot of attention as a super rookie, getting drafted 19th in the first round of the rookie draft. Since he made his major league debut in 2006 he has earned about 41 billion won ($36.4 million), and throughout his 11 years in the major leagues, he recorded a batting average of 0.284 with 108 home runs and 669 RBIs. With that in mind, the addition of Loney was a big deal for the KBO. 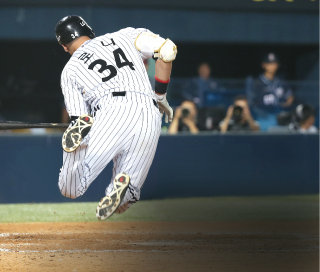 James Loney jumps to avoid getting hit by a ball during a game against the Doosan Bears at Jamsil Baseball Stadium on Aug. 8. [YONHAP]

But regardless of Loney stellar major league career, his relationship with the Twins only lasted 40 days, playing in 23 games. Loney did manage to record one finishing hit for the Twins, but on the whole he did not live up to expectations. Loneys KBO career comes to an end with a batting average of 0.278 with three home runs and 12 RBIs.

Loney was especially weak against fastballs, and it was this problem that led Yang Sang-moon, the manager of the Twins, to send him down to the Futures League.

Though Loney wasn’t much of a help to the Twins, the team will still feel the hole in their roster from the lack of a foreign player. The Twins still have time to bring in another foreign player in theory, but the KBO prohibits foreign players that enter the league after Aug. 15 from playing the postseason. Anyone they can get may be able to help the sixth-place team in their quest to reach the postseason, but they won’t be able to join them there. As the major leagues expand their entry in September, the chance of finding a prospect is also pretty slim. 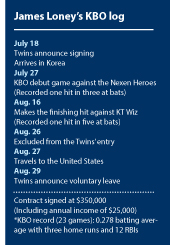 “We’ll spend the remaining season without a foreign player,” Yang said prior to the game against the Hanwha Eagles on Tuesday.

The Twins’ situation this season is very similar to the SK Wyverns’ second half of the season in 2014. At the time, Ross Wolf, the Wyverns’ closer, returned to the United States on Aug. 17 due to his son’s illness, and never came back. Jin Sang-bong, the Wyverns’ front office executive at the time, traveled to the United States with the hope of bringing Wolf back, but was ultimately unsuccessful.

Rather than having a new player added to the roster, the Wyverns went along with the players they had, but it wasn’t a happy ending. Wolf’s absence clearly showed. In the nine games Wolf played in 2014 season, he picked up a win and four saves with a 0 ERA. Wolf successfully switched his position from being a starting pitcher to the Wyverns closer.

Before Wolf left the roster, the Wyverns were ranked eighth in the KBO with 43 wins and 55 losses, trailing the fourth ranked team, the Lotte Giants, by 2.5 games. By the end of the season, the Wyverns finished fifth with 61 wins 65 losses and two ties, failing to advance to the postseason by finishing one game behind the Twins.

The Wyverns managed to stay strong by winning 18 of the last 30 games, but the gap left by Wolf wasn’t filled by any other player, as the Wyverns’ ERA for bullpens skyrocketed to 6.10. Yoon Gil-hyun, who was the Wyverns’ closer in Wolf’s absence, showed inconsistency in his pitching, having an ERA at 5.00s.

At this point, it is likely that the Twins will fill the Loney’s spot with either Jeong Seong-hoon or Kim Jae-yul. Jeong has played in the KBO for 19 years and this season he has recorded a batting average of 0.308 in 89 games. Kim is considered be the player with the most potential in the Twins’ lineup. Though it seems as if the two come from great playing backgrounds, they may not be enough to replace Loney. Jeong has had various minor injuries and Kim doesn’t have enough experience in the KBO.

As a result, the Twins chances of battling their way into the postseason have just taken a major blow.