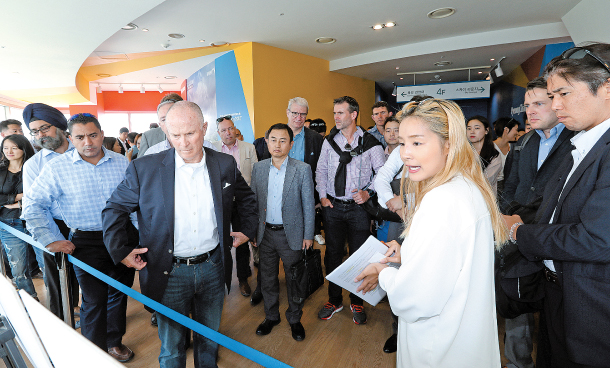 A group of foreign personnel, including officials of 35 International Olympic Committee member countries, attends a briefing session on South Korea’s antiterrorism measures for the 2018 PyeongChang Winter Olympics at an observatory at Alpensia Ski Resort in PyeongChang on Thursday. [YONHAP]

IOC Coordination Commission Chair Gunilla Lindberg and her team arrived in Pyeongchang on Tuesday for their last inspection, overlooking venues and infrastructure. Though there is still some progress to be made, Lindberg seemed satisfied.

“We had a very busy but successful three days,” Lindberg said. “It was encouraging to see the progress in the venues. This visit has given me full confidence that Pyeongchang is ready to host the Olympics in February. Now, we just need to make final plans to bring in the people and how to make the best possible experience for the upcoming game.”

For Korea, this is the first time to host the winter games. Korea will be the sixth country to have hosted the four major athletic tournaments - the summer and winter Olympics, FIFA World Cup and IAAF World Championship in Athletics. “The 1988 Seoul Olympics is still considered as one of the most successful games of all time,” Lee Hee-bom said, president of Pocog. “With the Olympics’ theme of peace, we’ll make sure to host another peaceful Olympics next year.”

Aside from the inspections of the venues, the IOC and Pocog hope to see more ticket sales from domestic fans. Starting on Sept. 5, tickets for the Olympics will be available online. Of a total of 1.18 million tickets printed, PyeongChang made 70 percent available for purchase to people living in Korea.

During the first two rounds of ticket sales in Korea, sports like short track, long track and figure skating have sold about 40 to 60 percent of all tickets, whereas sliding sports like skeleton, luge, or cross country ski only sold a little over ten percent.

As the National Hockey League (NHL) refused to release players due to a conflict in the league schedule, ticket sales for ice hockey have significantly decreased. This had been a great disappointment to hockey fans, as the Olympics is the only event for them to see all its top players compete on one stage.

“Just because we don’t have any NHL players playing in the Olympics, it doesn’t mean the country won’t participate,” Lee said. “Still, top countries like Canada, the United States and Russia will compete in the Olympics.”

But despite poor ticket sales in ice hockey, Pocog and IOC showed no concern in bringing the fans to watch the games. At the Rio Olympics, many top-ranked golfers chose not to participate in order to avoid the Zika virus, yet golf was one of the most successful events during the Games. Thus, the IOC hopes to see a similar success with ice hockey in February.

In addition to ticket sales, the torch relay will begin on Nov.1, and the torch will arrive at Incheon International Airport on that day. The torch relay is considered the most important event left until the Olympics, as it will also be a part of the countdown until the actual Games.