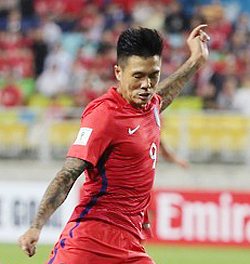 Troyes said Wednesday that they have agreed on a season-long loan deal with Porto for Suk, which also includes a purchase clause for a permanent move.

Troyes will be Suk’s 10th club in his professional career. The 26-year-old striker made his pro debut with AFC Ajax in the Netherlands in 2009.

This is Suk’s third loan spell since he moved to Porto. He joined the team from fellow Portuguese club Vitoria Setubal in January 2016, but was loaned to Turkish outfit Trabzonspor seven months later.

Suk, however, failed to impress at Trabzonspor, as he scored just one goal in 17 matches. He then moved to Hungarian club Debrecen this February also on a loan deal, but netted only once in 13 matches.

Suk returned to Porto this summer and has been training with the team’s reserve squad.

Troyes returned to the first division this season after a one-year hiatus. They’re currently 11th in the 20-team league.

Chung Hyeon cut from U.S. Open after falling to Isner

Chung Hyeon, a native of Suwon, Gyeonggi, has been eliminated from the second round of the U.S. Open.

Chung, ranked 47th in the world, fell to No. 15 John Isner of the United States in straight sets at the Billie Jean King National Tennis Center in New York on Wednesday. Isner dominated Chung in the match 6-3, 6-4, 7-5 in 1 hour and 45 minutes.

This was Chung’s second trip to the second round of the U.S. Open. His first was in 2015. He skipped last year’s event with an injury.

Isner dropped a whopping 30 aces to Chung’s four, and the Korean had zero break points. Isner’s fastest serve reached 223 kilometers per hour (139 miles per hour), while Chung’s hardest one touched 201. 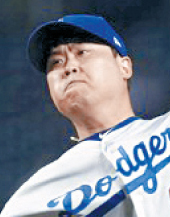 Los Angeles Dodgers starter Ryu Hyun-jin suffered his first loss in the second half after getting torched by the Arizona Diamondbacks.

The left-handed pitcher allowed a season-high six earned runs on eight hits, including three home runs, in four innings against the Diamondbacks at Chase Field in Phoenix on Wednesday.

With the Dodgers down 6-0 in the top fifth, Ryu was lifted for pinch hitter Adrian Gonzalez. The Dodgers lost 6-4 as their late rally came up short.

Ryu dropped to 5-7, and his earned run average rose from 3.34 to 3.71. Ryu’s previous loss was against the Washington Nationals on June 5.

Ryu also gave up three home runs in a game for the second time this season.

Prior to this rough outing, he had been outstanding since the All-Star break, giving up just six earned runs in his six second-half starts, a span of 35 innings, for a 1.54 ERA, but the Diamondbacks touched him for six runs in just four innings in this one.

Ryu was shaky from the get-go, giving up three runs in the opening frame. Adam Rosales, second batter of the game, hit a hanging curve ball over the yellow line at center field for a solo shot.

Ryu walked the next batter, A.J. Pollock, and then Paul Goldschmidt, who had been 8-for-19 against Ryu, jumped on a first-pitch fastball for a two-run blast to left.

The Diamondbacks made it 4-0 in the third on Brandon Drury’s two-out double. And then the bottom fell out for Ryu in the fourth, as Chris Herrmann’s solo home run and Pollock’s RBI single put the home team up 6-0.

Ryu’s previous season high for ERAs in a game was five against the Colorado Rockies in May.