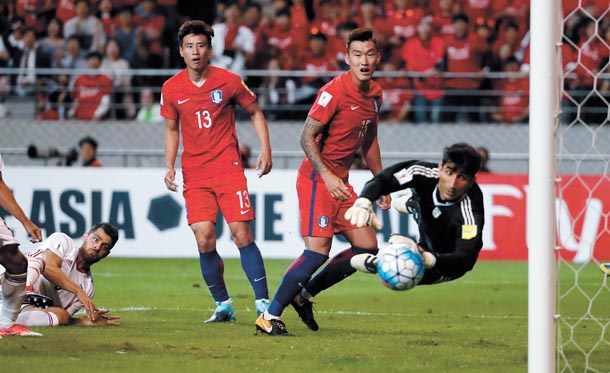 The Korean players, in red, watch a shot during the final 2018 FIFA World Cup qualification match against Iran at Seoul World Cup Stadium on Thursday. With another 0-0 draw against Iran, Korea maintains second in the Group A standing, two points ahead of Syria and Uzbekistan. Korea will play its final qualification match against Uzbekistan at Bunyodkor Stadium in Tashkent at midnight on Wednesday, Korea time. [YONHAP]

After a 0-0 draw against Iran during the final World Cup qualification match at Seoul World Cup Stadium on Thursday, Korea headed to Uzbekistan on Friday for their last shot at advancing to the World Cup. 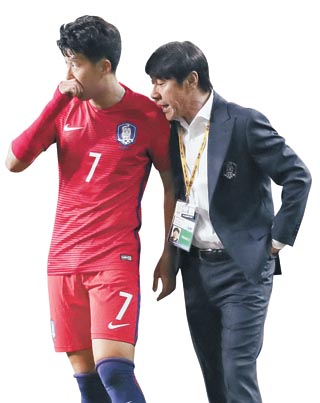 “Our match against Iran has already happened,” Lee Dong-gook said to the team before their departure to Uzbekistan on Friday. “We need to give our all in our last match.”

Even with Iran having one less player, Korea failed to win. During the match, Shin Tae-yong, head coach, used a 4-2-3-1 formation with Hwang Hee-chan up front and Son Heung-min as a left winger. Korea struggled, especially around the penalty area, showing their need for Ki Sung-yueng, who was unable to play due to a knee injury. Iran thus continued their no-loss streak and Korea once again failed to win against Iran, taking their all-time record to nine wins, eight ties and 13 losses.

In order to advance, Korea now has to win against Uzbekistan, who are aiming for their first World Cup appearance. During the 2014 Brazil World Cup, Uzbekistan barely missed their ticket by losing 9-8 in the penalty shoot-out during the qualification round playoff against Jordan.

If Korea has another draw, their advancement will depend on the result of the match between Syria and Iran. Currently, Syria is third in Group A, two points behind Korea, followed by Uzbekistan. If Syria wins against Iran, Korea will drop to third and will have to play against the fourth-ranked team in the North, Central America and Caribbean group.

But the pressure has already started to get to some of the players. After the match, Kim Young-gwon, captain of the team, said it was hard to communicate with the players on the field because of the screaming and yelling of fans. Before the team left to Uzbekistan, Kim apologized for his comment.

“Our mentality is the most important thing,” Lee Keun-ho said. “Only 14 of the 26 players get to play. Whether I play or not, I’ll try my best.”

It’s therefore important that they advance their best possible talent in the upcoming game. The team’s three veteran players - Lee Dong-gook, Yeom Ki-hun and Lee Keun-ho - have played in 232 national team matches and scored 56 goals total. A lot of fans are therefore clamoring for these three to lead the team in the upcoming match against Uzbekistan.

Though Shin still hasn’t announced his starting line-up, the three players have shown their strength against Uzbekistan. Lee Dong-gook has previously scored a total of four goals against Uzbekistan, and Lee Keun-ho has scored two. The two teams have played a total of 14 matches, with Korea winning 10, tying three and losing only one.

“We’ll have a shutout win against Uzbekistan,” Shin said. “Lee Dong-gook scored a lot of goals against Uzbekistan, but that’s when he was younger and was at his best. Right now, he’s older so rather than movement or speed, I consider his experience more important.”

Korea’s match against Uzbekistan will kick off at Bunyodkor Stadium in Tashkent at 8 p.m. on Tuesday, local time. The match will be aired live on JTBC, an affiliate of Korean JoongAng Daily, at midnight on Wednesday.