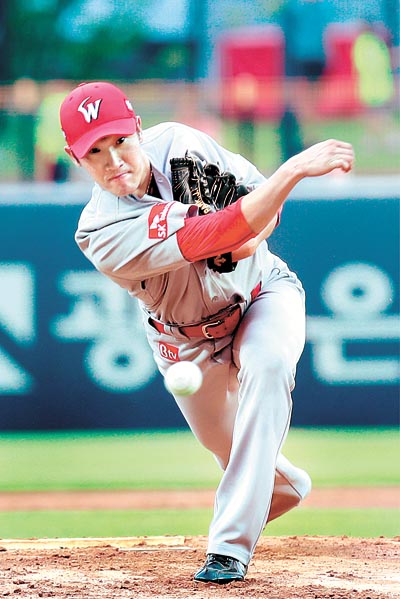 Park Jong-hun of the SK Wyverns pitches during a game against the Kia Tigers in Gwangju on Aug. 26. [YONHAP]

Park Jong-hun of the SK Wyverns, an underhand pitcher, has been a player with potential since his KBO debut in 2011. Among the submarine pitchers in the KBO, Park has the lowest release point - in the 2016 season it was just 28 centimeters. The Wyverns added Park to the starting rotation in 2015, expecting batters to struggle against the less common pitching style.

But despite expectations, Park’s ERA was stuck around 5.00 for his first two seasons on the mound, and in 2016 he walked more players than any other pitcher. Park lacked control, and this problem plagued him even into the beginning of this season.

At the start of the 2017 season Park was fifth in the rotation, a step down from where he had previously played, and when he struggled he was re-assigned to the bullpen or the Futures’ League.

But Park slowly made improvements and on Aug. 27, during the Wyverns’ game against the Hanwha Eagles in Incheon, he picked up his tenth win of the season for the first time since his debut. Park’s tenth win was especially poignant as it was the 100th game he has started in. 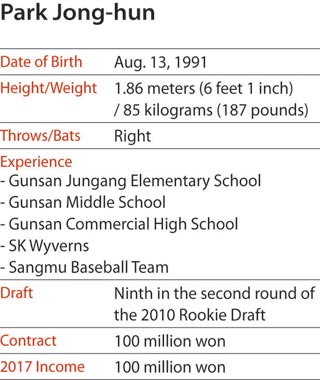 Aside from Kim Kwang-hyun, who is out for the season due to an elbow injury, the Wyverns managed to have all domestic pitchers pick up ten wins or more this season, the first time since 2012.

During the month of July Park struggled a lot, with two wins and two losses, and an 8.69 ERA. But Park never thought of his record in July as a struggle.

“I gave out a lot less walks,” Park said. “I gave up hits, but they weren’t clean hits. I think it was the wrong choice in the type of pitches. Now that I look back, I think it would have been better if I was more aggressive. I don’t think I was pitching badly.”

Picking up ten wins is already a great achievement for Park, as he ended the 2016 season with only eight wins. But rather than the ten wins, Park has had another goal in mind since the beginning of the season.

“My goal was to throw a total of 150 innings,” Park said. “Since I’ll be given about four more chances to get on the mound as the Wyverns’ starting pitcher, I’ll have to toss about six innings each to achieve the record.”

Up until last season, the only pitches Park made were fastballs, sinkers and curveballs, but starting in spring training, Park started throwing change-ups.

Park further challenged himself to throw forkballs during games and tried other different pitches.

“Up until now, there weren’t that many pitches I can throw,” Park said. “I need to continuously challenge myself and find a pitch that works the best for me. I’m still in the process.”

Aside from pitching 150 innings, Park hopes to stand on the mound in the postseason. He believes that giving up walks is a weakness he still has to improve on.

“We played in the wildcard game after finishing fifth in the 2015 regular season, but I didn’t get to play,” Park said.

With that in mind, Park now has a bigger goal for himself.

“Since the only category where I was ranked first in was the most number of walks, next season, I want to lower my ERA to between 2.00 and 3.00 or get ranked first in WAR.”