Chun In-gee is one of the best golfers out there, but she just can’t seem to claim the top spot. 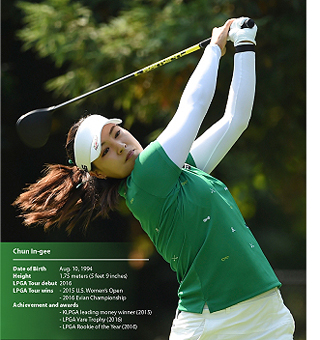 Chun In-gee watches her teeshot during the final round of the Cambia Portland Classic Presented by JTBC at Columbia Edgewater Country Club in Oregon on Sunday. [AP/YONHAP]

Chun played a beautiful game at the Cambia Portland Classic Presented by JTBC on Sunday, but despite an impressive day at the pine-lined Columbia Edgewater Country Club in Oregon, she finished second behind Stacy Lewis of the United States.

This was Chun’s fifth runner-up finish of the season.

Chun started the final round on Sunday four shots behind Lewis and came out strong for a bogey-free round of six-under-par 66. She made birdies on the first, fourth and seventh holes and while Lewis made 11 consecutive pars starting with the par-four eighth hole, Chun started to catch up with another birdie on the tenth.

Then they both had short putts for birdies on the par-four 12th hole, and when Lewis missed, Chun moved up to just two shots behind her. With another birdie on the par-four 16th hole, Chun was only one shot behind with two holes to go.

It all came down to the last hole, and it seemed as if Chun had a chance when Lewis hit her tee shot into the fairway bunker, but then Chun followed by landing hers over the green. Lewis successfully hit the green from the bunker, and Chun attempted a tricky chip shot to land a birdie and force a playoff. But the ball fell short and she ended up having to putt it in, ending the weekend at 19 under par.

“I made another bogey-free round so I think it was a great round today,” Chun was quoted as saying on the LPGA website. “Stacy played well, too. I really enjoyed playing with Stacy. I know she had a hard time before, so I want to congratulate her.”

Though a fierce competitor and a frequent finalist, she is also inconsistent, and has failed to finish in the top-ten in five consecutive tournaments, starting from the KPMG Women’s PGA Championship in June. But fans hope to see her win her first tournament of the season at the LPGA Tour’s last major tournament, the Evian Championship.

And Chun has more than a fair chance of doing so, as she won it last year.

As for Lewis, this was her first victory since the June 2014 Walmart NW Arkansas Championship and her 12th career victory. Making it more meaningful, she all her winnings of $195,000 to Hurricane Harvey relief efforts in Houston, Texas. Lewis grew up outside of Houston.

Before the Evian Championship, the LPGA Tour will head to Indiana for the Indy Women in Tech Championship Presented by Guggenheim, starting on Thursday.