Nuke test could be tipping point

Nuke test could be tipping point 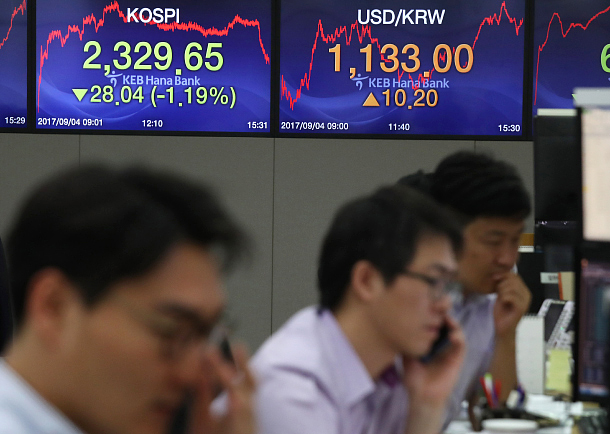 A stock market board at the headquarters of KEB Hana Bank in central Seoul shows the Kospi falling 28.04 points, or 1.19 percent from Friday’s close, to 2,329.65 on Monday, impacted by North Korea’s sixth nuclear test. [YONHAP]

Finance Minister Kim Dong-yeon warned Monday that North Korea’s latest nuclear test could have a stronger impact on South Korea’s financial market and real economy than past provocations, saying the problem had reached “global” proportions and that its effects may be longer-lasting than previous saber-rattling.

On Sunday, Pyongyang claimed to have detonated a hydrogen bomb small enough to fit on a missile that can reach the continental United States. The following morning, Seoul’s main bourse, the Kospi, opened more than 40 points down compared to Friday’s close, a drop of 1.72 percent.

Although the market stabilized not long after and regained half of what it lost earlier in the day, eventually closing at 2,329.65, down 28.04 points or 1.19 percent from Friday, it was clear that investors had become uncharacteristically spooked by North Korea’s increasingly bellicose actions.

Past provocations, whether they were missile launches or nuclear tests, briefly jolted the market, but investors quickly learned to adopt a keep-calm-and-carry-on attitude that has made the bourse resilient to Pyongyang’s repeat offenses.

“Amid the escalated uncertainties both externally and internally, the negative impact could widen if geopolitical risks including North Korea’s nuclear test and additional provocations are highlighted,” Finance Minister Kim said during a regular meeting with government officials at the Korea Federation of Banks headquarters in central Seoul.

“Recently, the North Korean problem has been expanding into a global issue, [but] the fundamental solution isn’t easy. There’s a possibility that this will not end as short-lived impact on the [South Korean] financial and foreign exchange markets but could have a negative influence on the real economy as well.”

The finance minister said the government would closely monitor the market in the next 24 hours and respond if needed.

Analysts believe North Korea’s latest nuclear test is different from past provocations and has broken investors’ confidence in the South Korean market. Kim Byung-yeon at NH Investment & Securities projected the Kospi could retreat to 2,200 at worst in the coming days.

The nuclear test, North Korea’s sixth since 2006, is considered to be the strongest the regime has been able to achieve. It came just a week after Pyongyang fired a short-range missile over Japan, a rare threat that prompted authorities in northern Japan to warn their citizens to take cover.

On the other hand, the chairman of South Korea’s Financial Services Commission, Choi Jong-ku, interpreted the market as being relatively calm on Monday, saying, “Foreign investors have maintained their net purchases, and on the foreign exchange market, the yen has shown relatively stable movement, which is positive.”

Whenever a crisis occurs, Choi noted, the yen’s value tends to rise drastically as investors flock to it as a safe haven, but as of now, “there is no significant change,” he said.

Still, the chairman towed the government line, saying he would continue to monitor the market.