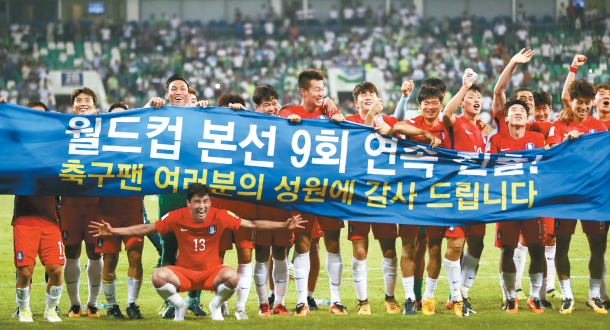 The Korean men’s football team celebrates after qualifying for the 2018 FIFA World Cup following a scoreless draw against Uzbekistan at Bunyodkor Stadium in Tashkent on Tuesday. [YONHAP]

In the end, Korea’s advancement to the 2018 FIFA World Cup, its ninth consecutive appearance, was a Pyrrhic victory.

It took another scoreless draw, against Uzbekistan no less, for the team to secure its berth. The players might be patting themselves on the back for a job done, but fans are disappointed by how close Korea was to losing its place in the quadrennial tournament.

In a high-stakes match late Tuesday evening at Bunyodkor Stadium in the Uzbek capital of Tashkent, the Korean squad played the home team to a 0-0 draw. For both countries, the game was pivotal and determined who would be in and who would be out of the World Cup.

Just as in its previous match against Iran, which also ended in a scoreless tie, Korea struggled with offense throughout the first half of the match. Surprisingly, it was winger Yeom Ki-hun who changed the flow of Korea’s offense during the second half. Yeom, who was substituted in during the 64th minute, made an accurate cross and through pass to help Korea land more shot attempts.

The team added more strength to its offense in the second half with the addition of Lee Dong-gook at the 88th minute. Although Lee had less than 10 minutes to play, he made three shot attempts with one shot on target.

Kim Min-jae’s appearance offered more hope as the team figures out how to best prepare for the World Cup. The 21-year-old defender made his national team debut during its match against Iran on Aug. 31 and was actively engaged in both matches, demonstrating great promise.

Despite securing a spot in the World Cup and delivering a positive performance in the final qualification matches, the team still disappointed Korean fans for failing to play up to expectations.

After the pivotal match against Uzbekistan, Shin Tae-yong, the team’s head coach, delivered an interview on the field in which he conveyed his feelings heading into the World Cup. The interview upset fans because Syria had yet to complete its match against Iran at the time. If Syria won against Iran, there was a possibility that Korea would drop to third in the qualification ranking and have to vie for a World Cup spot in a playoff round. Fans thought Shin’s optimistic remarks were rash.

Luckily, the Iran-Syria match concluded with a draw, but not without fans quipping that Team Korea should toss the Iranian football team coach in the air for helping them advance to the World Cup. “Korea still can’t score,” some online posts said.

Fans might cut Shin some slack for having just 10 days to prepare for the match against Iran and 15 days for the match against Uzbekistan after he was called in at the 11th hour to replace Uli Stielike, who was fired for the team’s dismal performance this year. Though it’s an achievement for Shin to lead Team Korea to the World Cup in such a short period of time, not many are giving him credit for it, because they saw zero competitiveness in the players throughout the two matches.

In the next nine months leading up the World Cup, the Korean team has a lot of opportunities to change. From strategy tweaks to roster shake-ups, Shin has a variety of cards in his hand. The players, too, will have time to work on their conditioning and teamwork.

Most importantly, fans will be looking at the role of captain, who facilitates communication between players and coaches and balances personalities on the field. Judging from the past two performances of the team’s current captain, Kim Young-kwon, things aren’t looking good. During the game against Iran, observers noted his attitude more than anything else. “It was hard for us to communicate between players due to loud cheers from the crowd,” Kim complained.

Although he meant to say lack of communication between players throughout the match, his comment rubbed fans the wrong way. They thought he was blaming them for Korea’s scoreless draw.

Aside from his perceived attitude problem, Kim failed to meet expectations during the game against Uzbekistan. He made frequent mistakes in defense, allowing Uzbekistan opportunities to score, another reason why fans have turned their backs on Kim.