From left: Kim Min-jae of Jeonbuk Hyundai Motors speaks to reporters after arriving at Incheon International Airport on Sept. 7. Kim Min-jae, in center on the ground, gets stepped on by Saeid Ezatolahi after competing for the ball during Korea’s match against Iran on Aug.31. [YONHAP, SCREEN CAPTURE FROM JTBC]

Korea’s scoreless draws against Iran and Uzbekistan in the last two World Cup qualification matches were disappointing, but they allowed Korea to advance to the World Cup for the ninth consecutive time, and though the matches were suffocating to watch, one performance came as a breath of fresh air - that of Kim Min-jae of Jeonbuk Hyundai Motors. 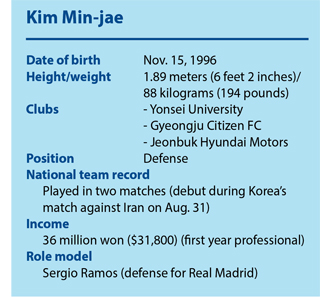 The 21-year old defender made his national team debut on Aug. 31, during Korea’s match against Iran at Seoul World Cup stadium, where he played a significant role in helping Korea play scoreless draws.

During the match, Saeid Ezatolahi stepped on his head after competing for the football in the air - Ezatolahi was given a red card and Korea continued its match with one less player on the Iranian team.

“I think Ezatolahi was fouled out by me tempting him more after I got hit by him,” Kim said. “I wanted to play more, but I felt dizzy so I asked to be substituted out of the match.”

Kim, a native of Tongyeong, South Kyeongsang, started his national team career in 2012, joining the U-20 national football team. When he first started football, he had to receive football shoes from older players in his neighborhood, as he wasn’t able to afford his own. To get to Seoul for the first U-20 national football team call-up, he had to drive seven hours with his father while the other players arrived the day before and stayed at a hotel overnight.

After his junior career, Kim continued his football career at Yonsei University for two years, until he left college to join Gyeongju Citizen FC of the Korea Football Association (KFA) National league in 2016. It was his first step toward becoming a professional football player, but since the national league didn’t receive enough financial support, it wasn’t easy. Once, when the team’s washing machine broke, Kim, being the youngest player, had to hand wash everyone’s laundry by hand.

Though Kim had a national team appearance as a junior, since he never got selected to the senior national team, he never had a chance to compete in the Olympics or any other international tournament.

“Since it was my very first time getting selected to the senior national team, I didn’t think I would get touchy when Korea advanced to the World Cup,” Kim said. “But when I saw Hwang Hee-chan of Red Bull Salzburg cry, I got really emotional. Before I joined the national team, the World Cup was something I never dreamed of, but now I don’t want to let go of my chance of playing in the World Cup.”

In his hometown, when Kim was selected to the national team, a banner was posted in downtown Tongyeong and now, on game days, his parents, who own a small sushi restaurant, close their business for the day and watch Kim play.