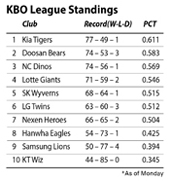 In the Korea Baseball Organization, there’s a big difference between the fifth and sixth spot in the table, as one of those teams is going through to the postseason and the other is heading home early.

As the league enters the last few couple of weeks, the top four teams are more or less decided, but competition is heating up for fifth place between the SK Wyverns, LG Twins and Nexen Heroes.

Since Sept. 6 the team in fifth place has changed almost daily. While the Wyverns and the Heroes were initially tied for fifth, the Heroes took the spot on Sept. 7. The following day the Twins moved up after defeating the Heroes 10-9 in an extra inning.

But as the Twins, who were on a four-game winning streak, lost 5-1 to the Doosan Bears on Sunday, the Wyverns regained their fifth spot, defeating the Heroes 17-8 in Incheon. That said, the three teams will have to play to their full ability to earn the last ticket into the postseason.

The Doosan Bears have once again started their race to catch up to the Kia Tigers with only a few weeks remaining in the regular season. During the Doosan Bears’ game against the LG Twins at Jamsil Baseball Stadium on Sunday, the Bears defeated the Twins 5-1. The Bears got off to a shaky start as starting pitcher Ham Deok-ju gave up three hits in the first three innings.

But the Bears’ batters exploded. At the top of the third, while the bases were loaded, Kim Jae-hwan hit a three-run home run to take the lead for the first time during the game, making the score 3-1. Then, with Yang Eui-ji’s sacrifice fly and Park Sei-hyeok’s hit at the top of eighth, the Bears extended their lead to 5-1.

As the Tigers lost to the Samsung Lions 9-6, the Bears are now only 3.5 games behind the Tigers.

In Suwon, the Lotte Giants beat the KT Wiz 7-5 on Sunday. With that, the Giants safely stay in fourth in the KBO, extending their lead to four games over the fifth ranked team, the Wyverns, and getting as close as three games behind the NC Dinos. 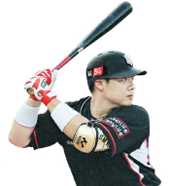 At times in the KBO there are players that show their full potential after getting traded to a different team. And Yoon Suk-min is one of the players.

Yoon made his KBO debut with the Doosan Bears in 2004 after graduating from Inchang High School. Starting in the 2011 season, Yoon appeared in more games in the Bears lineup, where he had his best season in 2012 with a 0.291 batting average with 10 home runs and 48 RBIs in 109 games.

Then, Yoon got traded to the Nexen Heroes in 2013, where he slowly made improvements in his batting every season. Aside from Yoon’s statistics before he got traded to the Wiz this season, he had his best season as a Heroes’ batter in 2016, having a 0.334 batting average with 19 home runs and 80 RBIs in 92 games.

On July 1, the Wiz announced a two and one trade with the Nexen Heroes to bring in Yoon, who got traded for the second time in his KBO career.

Though Yoon has played in 29 games, less than while playing for the Heroes, he has already surpassed the number of home runs and RBIs.

In addition, when looking at Yoon’s statistics just after July 7, he is ranked first in the KBO for RBIs and tied for fifth in the number of home runs.

Just by looking at his performance, Yoon has already had his best season. Though the season is not yet complete, Yoon has already played in the most number of games, at 127, exceeded his personal most RBIs in a single season and is only four away from exceeding 100 RBIs for the first time in his career.

Not only that, in the remaining 15 games, Yoon may well be able hit 20 home runs in a single season, as he is only one away. As of Monday, Yoon has recorded a 0.325 batting average with 19 home runs and 96 RBIs.

Starting today, the Wiz will start its two-game series against the Nexen Hereos at Gocheok Sky Dome at 6:30 p.m.