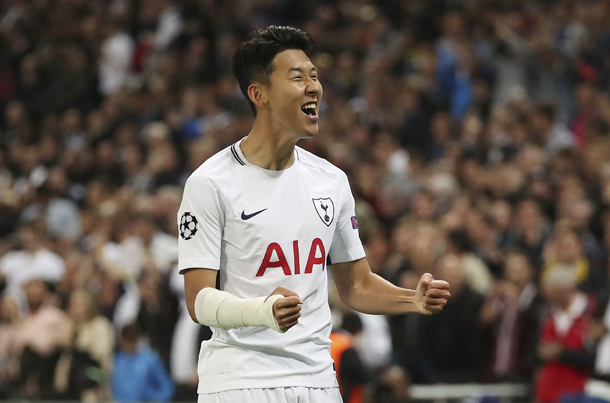 Son Heung-min of Tottenham Hotspur celebrates after scoring the opening goal of the UEFA Champions League match against Borussia Dortmund at Wembley Stadium in London on Wednesday. [AP/YONHAP]

Having only played in five matches this season, Tottenham Hotspur’s forward Son Heung-min scored his first goal of the season to lead Hotspur to a 3-1 victory against Borussia Dortmund at Wembley Stadium on Wednesday.

While the two teams were tied 0-0, Son allowed Hotspur an early lead with his first goal in the fourth minute, helping the team to their first UEFA Champions League match victory of the season. Afterwards, Hotspur allowed a goal to Andriy Yarmolenko of Dortmund in the 11th to tie the match, but four minutes later, Harry Kane scored Hotspurs’ second goal to take the lead. In the 60th minute, Kane again scored a goal assisted by Christian Eriksen.

Upon completion of the match, Son was given the second-highest score of 7.3 by whoscored.com, a football statistics website. Kane, who scored two goals throughout the match, was given the highest rating at 9.3.

Son’s goal has once again proven his dominance over Dortmund. During his career in the German Bundesliga during the 2010-11 season, he scored five goals in six matches against Dortmund. After transferring to Hotspur, he scored a goal against Dortmund in the round of 16 of the 2015-16 UEFA Champions League match.

In all, he has scored seven goals in nine matches against Dortmund.

In addition, Son has exceeded former Manchester United’s Park Ji-sung’s record for the most UEFA Champions League goals scored by a Korean football player. Park made four, and Son now has five.

Son made his English Premier League (EPL) debut in 2015 and has continuously set records ever since. By scoring his ninth goal of the season during Hotspur’s match against Swansea City in April, he became a new single-season record holder among Asian players in the EPL, exceeding Swansea midfielder Ki Sung-yueng’s eight-goal record.

Also, right before the end of last season, he surpassed the record of Cha Bum-kun, a legend in Korean football for being the highest-scoring Korean in Europe in a single season, with 19 goals. Throughout the 2016-17 season, Son scored 21 goals - 14 in EPL matches, six in the FA Cup and one in UEFA Champions league matches.

This season, Son is challenging himself to break another of Cha’s records, for highest-scoring Korean in his club’s league. Since 14 of the 21 goals were scored during the EPL matches, if Son scores 17 goals this season, he will again surpass Cha.

But his accomplishment on the European stage is not viewed positively by all, since he seems to perform less boldly when playing for the Korean national football team. Even at the recent FIFA World Cup qualification matches against Iran on Aug. 31 and against Uzbekistan on Sept. 6, Son struggled to leave an impression.

Looking at his career on the national team, he has played in 57 matches and scored 17 goals.

Though these statistics aren’t bad, the last time Son last scored for Korea was in October 2016 during the FIFA World Cup qualification match against Qatar, and as a result, he has received attention by those who question whether he’s doing his best when playing for his country or whether his country doesn’t know how to use him.