Another cabinet pick flames out

Another cabinet pick flames out 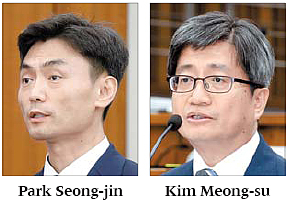 The Moon Jae-in Blue House issued a public apology Friday for the repeated failures of appointments to top government posts after a cabinet nominee dropped out because of his religious and historical views.

“We offer a sincere apology to the people for their concerns because the appointment controversies are continuing for a while,” Im said. “We promise to do better.”

Park, a mechanical engineering professor from Pohang University of Science and Technology (Postech), was named last month to lead a new Ministry of SMEs (small- and medium-sized businesses) and Startups. The ministry, created in June, was part of Moon’s ambition to create jobs and improve support for small companies.

Park was the last nominee for Moon’s cabinet. After a confirmation hearing at the National Assembly, lawmakers adopted a report Wednesday that concluded Park lacked the qualifications and skills necessary for the job. Moon’s own ruling Democratic Party opposed his confirmation.

It was the first time that a president’s party refused to accept a cabinet nominee since public hearings for appointees were first implemented under the Kim Dae-jung administration in June 2000.

The report questioned Park’s political, religious and historical views. In seminars, Park has invited members of a neoconservative group called the New Right to speak, and the professor himself has previously argued that dictatorship under President Syngman Rhee was necessary.

It also questioned ethical lapses, such as reporting a lower value for apartments he purchased in order to dodge taxes and accepting free stock from a start-up that his students ran.

The Blue House promised Friday it will improve its appointment system. “We will put our best efforts into making nominations from the entire human resources of the country, going beyond the ruling and opposition parties and their ideologies,” Chief of Staff Im said. He exhorted lawmakers to confirm Kim Meong-su as the new chief justice of the Supreme Court. He said time is running out because the current chief’s term will end next week. “Since the government was established in 1948, the head of the judiciary has never been vacant due to a delay in the legislature,” Im said. “The administration and the legislature have no right to stall the judiciary’s operations not for a single day.”

Kim, the 57-year-old head of the Chuncheon District Court in Gangwon Province, was nominated to the post last month to replace Chief Justice Yang Sung-tae whose six-year term ends on Sept. 24.

The designation of Kim, who formerly led a group of liberal judges, caused consternation among conservatives, as some fear it could fuel the judiciary’s swing to the left. Until the end of his term in May 2022, Moon will appoint 10 more justices on the top court’s 14-member bench.