With nine months until the 2018 FIFA World Cup in Russia and Shin Tae-yong having been confirmed as head coach for the men’s national team, speculation that Guus Hiddink might take the role has finally been put to bed. 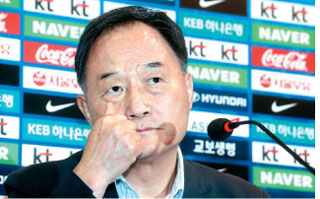 Kim Ho-gon, chief of the Korea Football Association’s technical committee, at a press conference at the National Football Center in Paju, north of Seoul. [YONHAP]

Hiddink is the legendary football head coach who led the Korean national team to the semifinals during the 2002 World Cup, and after Uli Stielike’s departure in June, some fans hoped Hiddink might return.

“I am ready to volunteer if the Korean people wish for me to serve,” Hiddink said that month, according to Secretary General Director Roh Je-ho of the Guus Hiddink Foundation.

But here’s the catch - Hiddink didn’t want to come back until the team had already qualified for the World Cup.

As a result, Kim went with Shin Tae-yong, and subsequently denied ever having discussed Hiddink’s candidacy with Roh, saying he has “not received any form of communication from Hiddink.”

Roh corroborated the story, saying Hiddink had not contacted the KFA in June expressing his intentions.

But last Thursday, Hiddink held a press conference in Amsterdam in which he said, “I am available as a technical director, manager or whatever.”

The day after Hiddink’s conference, Roh changed his story and came forward saying he had a record of a mobile-messenger conversation with Kim in June, in which Roh said to Kim that Hiddink was “interested in” possible participation. Kim then admitted to receiving the message, as well as two additional messages and a phone call from Roh.

The he-said-he-said scandal may be over, but the drama continues, as the current head coach of the Korean national team and the past head coach will soon meet face to face.

The KFA announced on Monday that national team, led by Shin, will play in a friendly match at VEB Arena in Moscow.

According to Roh, Hiddink arranged the match, as he had served as head coach for the Russian national team.

“Upon hearing that the Korean national football team was looking for a competitor,” said Roh, “Coach Hiddink had convinced the Russian Football Union to take them on for a friendly match in the fields for preparation of 2018 World Cup.”

On the list of invited VIPs for event is, of course, Hiddink himself.