Bae bounces back after accusations of illegal play

Bae bounces back after accusations of illegal play

Bae Young-soo, a right-handed pitcher for the Hanwha Eagles, finally picked up his first win in 102 days during the Eagles’ game against the LG Twins at Jamsil Baseball Stadium in southern Seoul on Wednesday. Bae gave up one run in seven innings to lead the Eagles to a 2-1 victory. 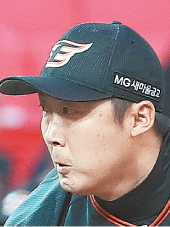 Bae’s legacy had taken a big blow this season after he was repeatedly accused of illegal pitching. During the Eagles’ game against the Giants on Aug. 20, Bae put rosin, a powdered form of resin, on his right leg and rubbed the baseball against it before he made his pitch. In baseball, rosin allows pitchers better control as it increases friction. Bae also rubbed rosin on his glove. The illegal move wasn’t caught at the time but went viral online after the game.

The incident in August was the second time that Bae had been caught breaking the rules against the Giants. In April he was caught on camera trying to distract players, presumably trying to gain a competitive edge against the Giants’ batters. Although Bae holds the record for the most career wins among the active pitchers in the KBO, it seemed likely that his impressive career would always be overshadowed by allegations of foul play.

Bae apologized four days after the game in August, saying, “It’s all my fault, I won’t make any excuses,” but it was not easy for the fans to forgive him.

“It was a hard time. For a while, I was careful about even touching the rosin,” Bae said. “I wanted to overcome it.”

After the incident in the summer Bae fell into a rut. He didn’t pick up a win for 12 consecutive games, unable to drown out the growing criticism from the Eagles’ own fans.

On Wednesday Bae finally managed to pull himself together. With one out and the bases loaded in the third inning, he came very close to throwing the game away. In a final return to form, Bae was able to close the inning without giving up a single run.

“Since I didn’t lose any speed in my fastball, I knew that I would be able to get through the inning without giving up a run,” Bae said.

Bae made a total of 73 pitches in the first six innings. He concluded the seventh inning with three strike outs. Though he failed to pick up a shut-out win by allowing Park Yong-taik to hit a solo home run, Bae’s pitching was much stronger than it had been over the previous month.

“I’ve been pitching well in the five most recent games,” Bae said.

When Bae’s name was excluded from the Eagles’ roster at the beginning of August, he got to rest and make improvements to his balance.

“I’ve gotten a lot of advice from the Futures’ League coach Choi Kye-hoon,” Bae said. “Due to my shorter weight transfer I lost power in my pitch.”

That said, a win against the Twins has now allowed Bae to surpass Kim Won-hyong, pitching coach for the Giants, on career wins. Bae now moves up to fifth in the all-time career wins ranking.