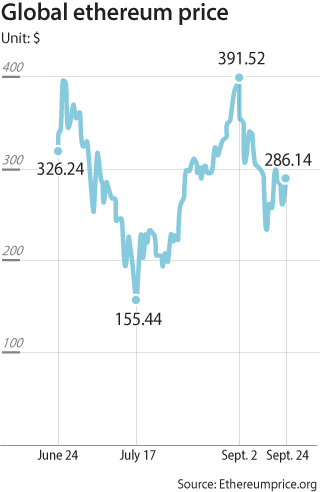 As cryptocurrencies gain traction in Korea, ethereum has emerged as the coin of choice for miners and investors. Its popularity in the country has made Korea the world’s top market for ethereum and even pushed up its global value in the past few months.

As of Friday, the top market in the world for ethereum remains Bithumb, Korea’s largest cryptocurrency trading platform, according to Coin Market Cap, which tracks the performance of digital currencies. Their data showed nearly $120 million worth of ethereum was traded on Bithumb from 12 p.m. Thursday to 12 p.m. Friday, accounting for 19 percent of global ethereum exchanges.

After Bithumb, Coinone and Korbit, also Korean trading platforms, were ranked fourth and fifth in ethereum trading. A combined amount of $72 million was bought and sold through the two smaller platforms, and together, the three Korean platforms account for 30 percent of all ethereum trading around the world.

“Chinese mining groups have essentially dominated bitcoin,” an industry sources said, “but ethereum is relatively less competitive, which gives better chances for smaller Korean miners. And when it comes to actual trading, the price of bitcoin is quite steep, whereas ethereum is more affordable.”

Global ethereum trade immediately picked up following the boom in Korea. The price went from $195 on May 25 to nearly $400 by mid-June. By the end of August, one unit of ethereum was being traded at around 425,000 won on Bithumb.

The value of the token in Korea, however, could not avoid the ebbs and flows of global trends. Earlier this month, the Chinese government issued a ban on initial coin offerings, a capital-raising process akin to an initial public offering but through issuing cryptocurrency units instead of stock. The People’s Bank of China said initial coin offerings would seriously damage “the economic and financial order of China” in its policy announcement on Sept. 4.

As a result, the prices of different cryptocurrencies plummeted by as much as 20 percent. The value of ethereum fell by over 17 percent at one point.

Although the Chinese government’s move helped boost Korea to No. 3 in cryptocurrency trading, prices have been struggling here as well.