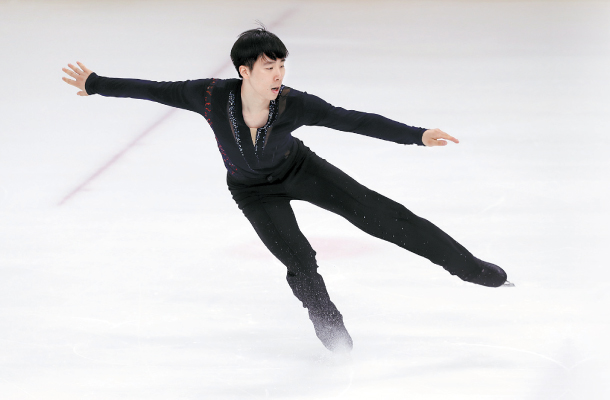 Former Korean national figure skating champion Lee June-hyoung will chase a spot at the 2018 PyeongChang Winter Olympics in the final qualifying event in Germany this week. 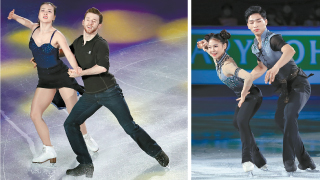 From left: Min Yu-ra and Alexander Gamelin perform during the gala exhibition. Kim Su-yeon, left, and Kim Hyung-tae perform at the gala exhibition at the ISU Four Continents at Gangneung Ice Arena in Gangwon in February. [YONHAP]

Lee, a three-time Korean champion, will skate at the Nebelhorn Trophy in Oberstdorf, Germany, starting today.

In this last Olympic qualifying competition, six tickets to the 2018 PyeongChang Winter Games in the men’s singles will be up for grabs.

If Lee finishes in the top six, then Korea will be able to send a male skater to PyeongChang 2018 next February. If not, the host nation will not be represented in one of the more glamorous Winter Olympics events.

The men’s singles field at the Nebelhorn Trophy will have 27 skaters. Of the 15 nations that have already secured Olympic berths, only the United States will send a skater to Germany. This leaves 26 skaters vying for the six spots.

There are eight skaters this week who have higher best scores than Lee, seven of them with points ranging from 210 to 250.

Lee earned the right to compete at the Nebelhorn Trophy by winning the Figure Skating Korea Challenge in July.

He skated a conservative free skate program without a quadruple jump, and Lee has said he will stick to his “safe” routine in Germany.

Even if Lee clinches an Olympic spot at the Nebelhorn Trophy, it doesn’t mean he will get to represent the host country next February. There are still two more rounds of Korean Olympic trials left.

Lee got a head start by winning the Figure Skating Korea Challenge, which doubled as the first round. The Korea Skating Union (KSU) will hold another qualifying competition in December, and the national championships in January next year will be the third and final event for Korean Olympic hopefuls.’

At the Nebelhorn Trophy, Korea will also try to earn Olympic berths in the pairs and ice dance. Kim Su-yeon and Kim Hyung-tae will compete in the pairs, where four Olympic tickets will be at stake. Of the 16 tandems at the Nebelhorn Trophy, five will represent countries that have already qualified for the Olympics. The Korean duo’s career-best score is 140.68 points, the third-lowest in the field.

North Koreans Ryom Tae-ok and Kim Ju-sik will also be at the Nebelhorn Trophy, putting them among the last athletes from their country with a chance to qualify for PyeongChang 2018. Their best score is 169.65.

In ice dance, Min Yu-ra and Alexander Gamelin will be vying for one of five tickets to PyeongChang. Of the 18 teams, only two are from countries that have already qualified. Min and Gamelin’s personal best for the event is 151.35 points, fourth-highest in the field.

Gamelin, a U.S. native, was granted a Korean passport in July.