‘Man of Will’ depicts Kim Koo as young man

‘Man of Will’ depicts Kim Koo as young man 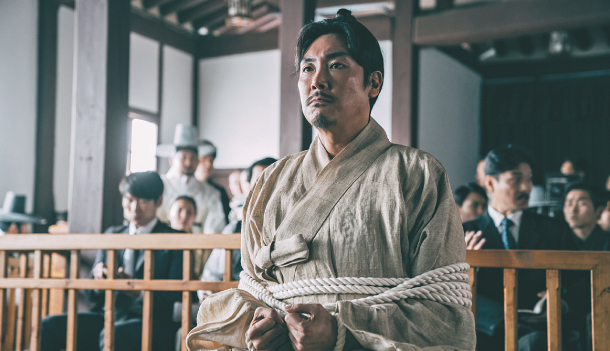 “Man of Will” is a period epic centering on the early life of a prominent independence activist. [CINEGURU]

A few days after the star-studded period epic “The Fortress” hits theaters early next month, another historical movie will open.

Written and directed by Lee Won-tae, who was behind the production of the comedy-horror “Spellbound” (2011), the upcoming “Man of Will” depicts the early years of Kim Koo, a leading Korean independence activist.

Kim, also known by his pen name, Baekbeom, was the last head of Korea’s provisional government during Japan’s colonial occupation (1910-45) in Shanghai.

Instead of shedding light on the shining moments of the independence activist’s life, the film is closer to a coming-of-age story of an ordinary young man.

The film features the early phase of Kim’s life, when he is sent to prison after killing a Japanese trader whom Kim believed might have assassinated Korea’s Empress Myeongseong in 1896.

The movie stars Cho Jin-woong as Kim and Song Seung-heon as a cold-hearted Korean prison director, who treats Korean prisoners harshly for his own gain.

“I wanted to tell a story about Kim Koo in an easy way so that everybody can watch it,” said the filmmaker during a press preview held in central Seoul on Wednesday. “There are lots of great historical figures who we are not actually well aware of. We only have basic knowledge about them. So I wanted to tell the story of Kim Koo’s dark early days before he became prominent.”

As respected as Kim is, Cho found it difficult to play the character.

“Honestly, it wasn’t easy for me to handle it .?.?. I thought it would be impossible for me to depict his heart no matter how much I prepared. The only way for me was to naturally get immersed in the character.”

For Song, there was no hesitation when offered the villainous role.

“I didn’t have a second thought when offered the role. As an actor, I had a thirst to play more diverse characters, as I had mostly played righteous roles that were on the side of justice.”

The movie, scheduled for release on Oct. 19, is rated for viewers 12 and above.