Why Southeast Asian women are queens of ramie songpyeon

Why Southeast Asian women are queens of ramie songpyeon 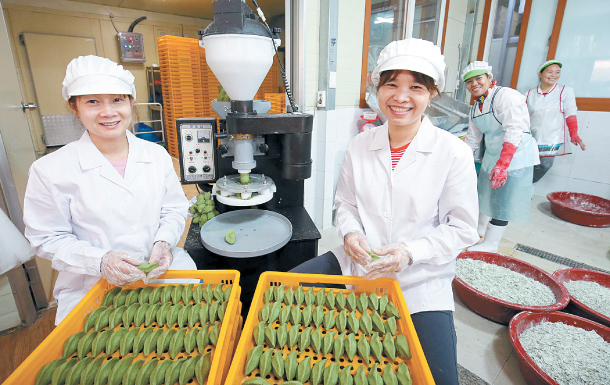 With the Chuseok holidays upon us, many have already left city centers and will be sleeping tonight in their ancestral hometowns, while visions of songpyeon dance in their heads - unaware that the famous ramie songpyeon they will likely enjoy over the next week are largely a product of Southeast Asian women.

“You only get that perfect chewiness,” says Kim Soo-jin, “when the rice and ramie leaves are mixed in a 10-to-2 ratio.”

Kim, 42, knows what she’s talking about - she came from the Philippines 14 years ago as a migrant bride, and has been in the songpyeon industry for three years and is now the captain of her team at Soldam Ramie Leaf Songpyeon Factory in Yeonggwang, South Jeolla.

With the efficiency of a Hyundai assembly line, Kim and her team pound rice and water into dough, pinch off tablespoons, pack them with cowpea or sesame seed filling, then fold them shut and shape them into crescents. The other members of her team are Genalyn, also from the Philippines, and Noh Yoo-bin and Won Jee-young, who both moved from Vietnam 10 years ago.

“If I finish making songpyeon early,” says Kim, “I can squeeze in time for my other part-time jobs, such as wrapping parcels. I try to save time by ordering food.”

Songpyeon, a moon-shaped rice cake, is the quintessential Korean snack traditionally enjoyed during Chuseok, with each region producing unique varieties using local ingredients. The popular green type made from fragrant ramie leaves is a Yeonggwang specialty, where about 60 to 70 percent of songpyeon factories hire immigrant women during Chuseok.

Until about 10 years ago, the songpyeon industry in Yeonggwang was struggling. That’s when ramie leaves, historically used to make summer clothing, became popular for their high fiber and antioxidant properties. About 130 songpyeon companies in the area now contribute to making 30 billion won ($26.2 million) per year in sales.

Whereas songpyeon-makers used to toil away with their families or use costly and unreliable machines, these days many have turned to hiring immigrant women, who typically operate in teams of four to five.

For every 240 kilograms (528 pounds) of rice made into songpyeon, Kim and her team receive 240,000 to 260,000 won. A team like Kim’s can do that amount of work in four hours, while slower teams may take seven or eight. To maximize their working time, many forego eating. These women normally earn 1.5 million to 2 million won per month at their full-time jobs and can earn up to 3 million won per month making songpyeon on the side.

“I love being able to save money I can then spend on my children,” Won says. “I’m so happy to earn money while working with people from my own country.”

Many of these women work full-time jobs or look after their children during the day, but make time at night or during weekends to make songpyeon. Won, a full-time care worker at a Yeonggwang hospital, makes songpyeon during the weekends and on holidays, when she’s not caring for her patients. Genalyn works as an English teacher at a nursery school just outside Yeonggwang, but joins the team whenever her captain calls on her.

“Even though it takes a lot of effort,” says Genalyn, “the work is meaningful because I’ll have more money to spend during the holidays.”