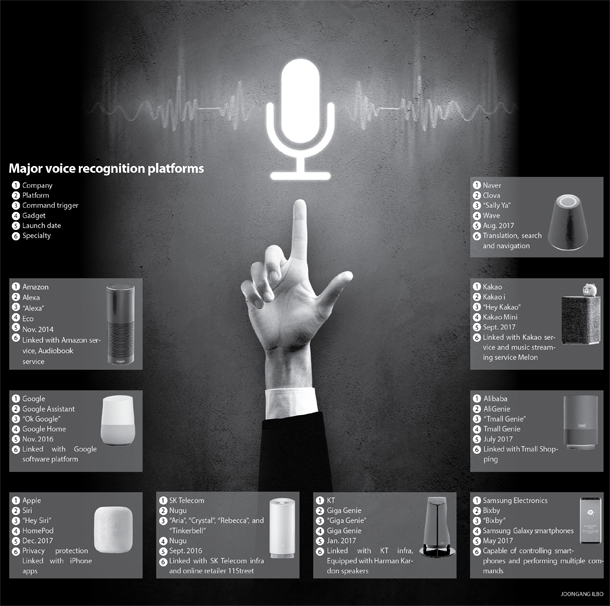 Korea has seen a surge of public interest in the emerging smart speaker market in recent weeks as portal site Naver sold out of 8,000 units of its new smart speaker, Wave, at two pre-order events.

Kakao also sold out of 3,000 units of its smart speaker, Kakao Mini, only 38 minutes after pre-orders opened.

Smart speaker sales have surged as companies have worked hard to attract customers with package deals and coupons for free music streaming services.

Technology research firm Gartner estimates that the smart speaker market will grow to $3.52 billion by 2021 from last year’s $720 million, nearly a fivefold increase over a mere five-year period.

To determine if the burgeoning smart speaker market has reached a tipping point - the point at which the technology starts to become a part of most people’s lives - in Korea it is necessary to consider not only how big the market is but also how advanced the technology is and how competitive local companies are in the industry.

How advanced is its technology?

A smart speaker is a device that works with an intelligent personal assistant to offer more functions than just audio playback. How deftly it can hear commands and how well it can respond is the key to its capabilities.

Industry experts say that the latest smart speakers have a voice recognition accuracy rate at nearly 96 percent, well beyond the requirements of most users.

“Smart speakers’ ears do not stand in the way of their capability development anymore. What matters now is how capable they will be in grasping the context of conversations with their owners and understanding commands,” said Sin Jin-woo, professor of electric engineering at the Korea Advanced Institute of Science and Technology in Daejeon.

For a smart speaker to produce truly smart answers, it needs to have sound artificial intelligence algorithms and access to big data from which it will draw clues as to how to respond to comments or inquiries. No company has yet to master the integration and use of big data for smart speakers.

Lee Kyoung-jun, a professor in the school of management at Kyung Hee University, noted that there is a long way to go before artificial intelligence-equipped speakers can understand the subtle context of dialogue or multitask.

“So far, most AI platforms are only able to provide fragmentary information like weather,” Lee said.

How big is the market?

For voice-recognition gadgets to take firm root in the market there needs to be an ecosystem, just like smart phones need a wide variety of applications to attract potential buyers.

E-commerce giant Amazon has been at the forefront in creating such an ecosystem for its voice platform. From 2015, Amazon began building what’s known as the Alexa Skills Ecosystems and has expanded it at an exponential rate. The number of Alexa skills has recently passed the 20,000 mark, up by 5,000 from the end of June this year, according to the voice platform company VoiceBot.

“Alexa’s Skill System is expected to reach the 100,000 mark in the number of skills sometime next year. Given that Apple’s iPhone only had around 500 applications on its iOS debut, Amazon’s feat is remarkable,” said Choi Jae-hong, professor of multimedia engineering at Gangneung-Wonju National University.

Naver is set to unveil its voice platform Clova in November, its first step to building its own smart speaker ecosystem.

“As the voice recognition industry is still at a nascent stage, the existing market could be upended if a company with a powerful ecosystem platform comes forward,” said Choi.

It will not be an easy task for Korean companies to take the lead in the global smart speaker market considering the vast databases and far-reaching service ecosystems operated and developed by giant tech companies such as Amazon and Google. But one thing to watch is whether Korean companies can dominate the Korean-language market.

Experts say the Korean firms have the upper hand in the domestic market since they have larger databases and better voice-recognition technology when it comes to the Korean language. Naver is considered to be far ahead in the amount of Korean-language based big data it has collected, while Kakao is working to set up an ecosystem built on its online to offline commerce model. Samsung Electronics is leading in terms of artificial intelligence.

“Naver is taking the lead in amassing audio content while Kakao is expected to provide powerful [online to offline] service content,” said Lee of Kyung Hee University, “Any company that presents consumers with ‘killer content’ will have the momentum to dominate the market.”