A marriage made in craft heaven : Craftworks are combined with media arts at 10th biennale in Cheongju

A marriage made in craft heaven : Craftworks are combined with media arts at 10th biennale in Cheongju 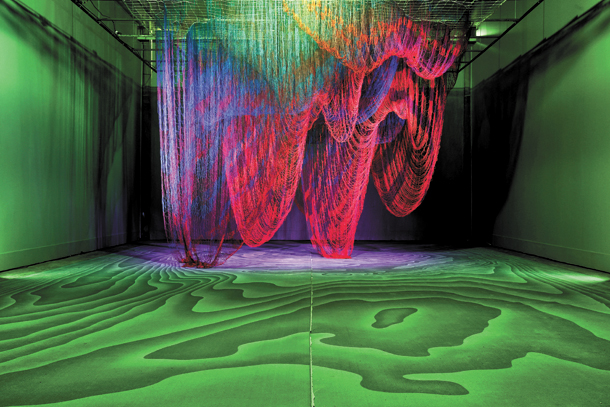 Janet Echelman’s “Line Traveling Through Space and Time” (2016), which invites visitors to lie down or stand below the artwork to “experience changes of color and ethereal masses of the net hung in the air,” according to the artist. It is currently being exhibited in the Feature Exhibition section titled “Re:Craft” of the Cheongju Craft Biennale. [CHEONGJU CRAFT BIENNALE]

CHEONGJU, North Chungcheong - Usually, when craftworks are put on exhibition, it’s a rather static experience, requiring little more of visitors than perhaps bending forward to take a closer look. But this year’s Cheongju Craft Biennale invites visitors to sit or even lie down to interact with craftworks that incorporate other kinds of media.

Celebrating its 10th anniversary, organizers of the Cheongju Craft Biennale say craftworks at an international biennale should no longer have visitors merely “see the exhibition in a passive way,” but also allow them to “participate and play with craft.”

“By offering artists and craftsmen an opportunity to combine new media art and craftworks, we wanted them to experiment and broaden the future potential of crafts while offering a more active exhibition experience for visitors of exhibitions in this 21st century,” said Kim Ho-il, secretary-general of the biennale’s organizing committee.

The craft biennale kicked off on Sept. 13 at what used to be a tobacco processing plant in Cheongju. It features some 4,000 works presented by 780 teams from 16 countries under the theme, “Hands+ Embrace.”

“It’s been 20 years since we started the event and we underwent numerous trials and made a lot of errors,” Kim said. “Since we are in our 10th edition, we thought it was time we break with the tradition of inviting artistic directors from abroad and go local, to truly make this event Cheongju-made.”

The organizing committee designated 11 artistic directors from various fields of arts and culture, including performance, video, art, literature, architecture and technology to co-direct this year’s event in an attempt to show diversity.

“Although it is a craft biennale, we wanted to turn it into a festival-like event in which all circles of arts and culture could come together to shed new light on craftworks,” Kim said.

“Re:Craft,” the main exhibition, invites visitors to four different sections displaying diverse works of artistic craftworks. According to the organizing committee, the distinction between craft and art blurs more as time passes, and modern day works that combine media, art and craft can be witnessed in the seven rooms presented by seven media artists.

One of the rooms displays Janet Echelman’s “Line Traveling Through Space and Time.” Visitors lie down underneath the artwork to not just see it but to experience it. The artist colored fishing nets, and then employed digital techniques on top of them, which took as long as four years to develop. According to the artist, this installation challenges the viewers, looking up at the nets while lying down, “to imagine the three-dimensional volumetric forms embedded within the beautiful craftsmanship of the knotted lines of colored fiber suspended before their eyes.”

The second section attempts to compare traditional crafts, contemporary crafts and crafts that collaborate with media art. Some of the artists in this section display works created using 3D printers. Holland-born artist Daniel De Bruin even exhibits what he calls the world’s first analog 3D printer, which he built because the works he created with digital 3D printers did not feel like his own. His analog 3D printer uses pressure from a pulley system to extrude clay to make a piece of pottery. The artist says these are works of art that he takes full ownership of because they incorporate the artist’s physical and emotional engagement.

The third section of the main exhibition invites visitors into a darker hall where craftworks that have been created in collaboration with media artists are displayed. Projectors beam images and lights onto the craftworks, presenting a uniquely fresh exhibition experience. Such collaborations, according to the organizing committee, allows artists to experiment and present aesthetic illusions by projecting images onto crafts reflecting the artists’ philosophy and spirit.

The final “Embrace” section presents video images of the works and how the works are created by some of the artists who participated in previous biennales.

Apart from the main exhibition, there’s also a Global Pavilion that allows visitors to learn about craftworks from nine countries including Germany, Finland, the U.K., Singapore, Switzerland, Italy, Japan, Mongolia and Korea. Details are available at www.okcj.org. The entrance fee is 10,000 won ($8.79) for adults.