With six gold medals over the weekend, Korea has dominated the first of four series at the Audi ISU World Cup Short Track Speed Skating 2017/18 in Hungary. 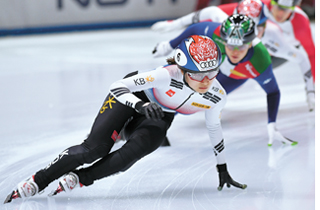 Choi Min-jeong races in the women’s 1,000-meter final during the first of the four of the ISU World Cup Short Track Speed Skating qualification series for the 2018 PyeongChang Winter Olympics in Budapest, Hungary on Sunday. [AP/YONHAP]

Choi Min-jeong got off to a great start in her first Olympic season with four golds, winning one in the 1,500-meter race and another in the 500-meter race on Saturday, plus two in the 1,000-meter and 3,000-meter relay races. During the 1,000-meter race, she competed against her teammate, Kim A-rang, along with Elise Christie of England and Kim Boutin of Canada. With five laps to go, Choi quickly moved to second, and in the final two laps, soared ahead to finish first at a time of 1:34.660, finishing 0.139 seconds ahead of Boutin.

In the women’s relay, the team - Choi, Shim Suk-hee, Kim and Kim Ye-jin - stole the lead from Canada, who had it for the first 13 laps, finishing 1.424 seconds ahead of them.

“I’m really happy,” Choi was quoted as saying on the ISU website. “I feel more confident than yesterday. The final race was pretty easy because I had such good results yesterday and got a lot of confidence.”

This was a turnaround for Choi, who finished sixth at the World Cup race in March after slipping during the race.

“I think I need to work on technical areas because I felt like I still need to improve on my techniques,” Choi said during an interview with Korea Skating Union (KSU).

Shim won a bronze in the 500-meter race, in addition to her gold in the 3,000-meter relay. During the 1,500-meter race, Shim finished third, but was penalized.

The men’s team also had great success, with the rookie players Lim Hyo-jun and Hwang Dae-heon leading the team. Aside from the 5,000 meter-relay race, the men’s team made it to the podium for all four races that they raced in over the weekend.

But Seo Yi-ra, the reigning world champion at the 2017 ISU World Short Track Championship, held in Rotterdam last March, failed to medal in any of the four races he competed in. Seo’s best finish was fourth in the 1,500-meter race with a time of 2:15.453, 0.684 seconds behind Sjinkie Knegt of the Netherlands, a bronze medalist.

The team will start their second ISU World Cup race at the Netherlands starting on Thursday. The last two World Cup races will be played in Asia, as the third event is to be hosted in Shanghai, scheduled to start on Nov. 9, and the last of the four World Cup series will conclude in Seoul on Nov. 19.