Soul-searching after a 4-2 loss to Russia

Soul-searching after a 4-2 loss to Russia 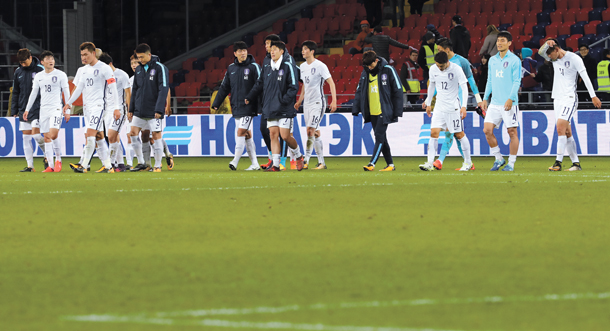 The Korean men’s football team leaves the field after losing 4-2 to Russia in a friendly match at the VEB Arena in Moscow on Saturday. [YONHAP]

After a disappointing 4-2 loss to Russia in a friendly match, the Korean men’s football team is hoping for better luck against Morocco today.

Throughout Korea’s match against Russia on Saturday, the players showed that their weakness still remains in defense. The team allowed one goal in the first half and three goals in the second half, with two of the three given up by defensive player Kim Ju-young.

“We don’t have to be influenced too much by the result of a friendly match,” Coach Shin Tae-yong said in an interview with Yonhap on Sunday in Switzerland, where the team will play Morocco. “I’m now looking for players who can be the backbone of this team. Once we have core players, we can find new faces to support them.” 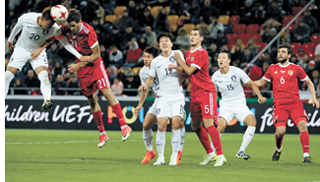 The Korean players, in white, fight for the ball during their game against Russia. [YONHAP]

After the match, fans harshly criticized Kim. Throughout his career, the 29-year-old has been known as a smart and fast defensive player. Though he is considered short for the position, standing at 1.84 meters (6 feet), Kim has been able to overcome that with speed.

In his match against Russia, though, his 10th international match, things ended in a nightmare.

“You can make mistakes during the match,” Shin said, “so I didn’t say anything special to him. If I said anything in consolation, it would have added to the player’s stress.”

With Korea down 4-0 at the 90th minute, Kwon Kyung-won and Ji Dong-won were able to avoid a shutout loss by scoring in overtime.

After the match, Shin mentioned that the biggest factors in Korea’s loss to Russia were Kim’s two follies and lack of decisiveness on when to score.

The loss means Shin’s record since joining the team as head coach in July remains winless, at two ties and one loss.

“Since the team was created without a single K League [Korean league] player, it is hard to expect great teamwork in defense,” Shin said during a press conference after the Russia match at VEB Arena in Moscow. “Defender Kwon Kyung-won scored his first A-match goal and striker Ji Dong-won scored a goal for the first time in a while. That said, from now on, our offense has to score more goals.”

In addition to Kwon and Ji, Shin also showed satisfaction with defender Kim Young-kwon and midfielder Lee Chung-yong. The coach is still in the process of preparing the team for the World Cup next year and said he would not tolerate any nonchalance.

“We’ve had difficulties reaching the World Cup, but we do have to get good results at the games,” Shin told Yonhap. “I’m not going to pick players who are careless and have easygoing style. The players need mental toughness and have responsibility.”

Since Shin will start selecting players for his World Cup squad in March, aside from the three goalkeepers who are already set in their positions, he will give all 20 players the opportunity on the field during their friendly match tonight.

“Before we think about the World Cup finals, we first need to test all the players,” Shin said. “Since I need to have an idea of who my core members should be for this team, I plan to use all the athletes even if they hit the pitch for only a few minutes.”

Against Morocco, Shin is likely to deploy the same back-three formation he used in the Russia match, with Lee Chung-yong and Rim Chang-woo as wingbacks and Song Ju-hun, Jang Hyun-soo and Kim Ki-hee as the three-back.

Morocco, ranked 56th in the world, is currently the leader in Group C of the FIFA World Cup Africa qualifiers after defeating Gabon 3-0 on Saturday.

The Korean team will play its friendly against Morocco at Tissot Arena in Switzerland tonight at 10:30 p.m., Korea time.