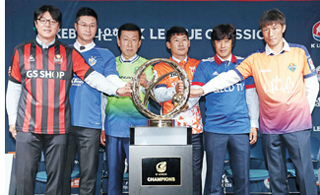 Looking at the recent results and the table, Jeonbuk is the most likely team to win the Classic this season. On Sunday, Jeonbuk defeated Jeju 1-0 for their 200th win in the league, becoming the third team in history to do so. Not only that, the victory has allowed Jeonbuk to extend their lead to 65 points, six points ahead of Jeju and Ulsan.

“We’ve achieved our 200th victory,” said Choi Kang-hee, manager of Jeonbuk. “I’m very thankful to the fans. And to pay them back, I want to invite Jeonbuk fans, according to our number of wins by the end of the season, to the clubhouse.”

During the media day, Choi said he expects to invite a total of 203 fans to the clubhouse, as Jeonbuk only has to win three more matches to guarantee a regular season victory. 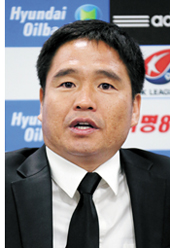 “There is no such thing as an easy match in the split,” Choi said. “We will have to prepare well for the upcoming matches. I am aware that we are the biggest competitor to the five other teams. But to win, it is something that we’ll have to overcome.”

Just like Choi said, the other five managers have shown strong determination to end Jeonbuk’s dominance. Jeonbuk will play their first split match against Seoul at Jeonju World Cup Stadium on Sunday. In addition to the regular season victory, the split matches are also important as the top three teams gain a spot in the AFC Champions League.

Aside from the managers’ determination to win the K League and a spot in the AFC Champions League, the death of Cho Sung-hwan, manager of Busan IPark, was a bigger issue during the media day, drawing attention to the stress of being a manager.

Cho died of a heart attack at age 44 on Tuesday. This season, Busan is currently ranked second, well in position for a possible promotion to the Classic. Since the head coaches’ career depends heavily on the results of the matches, they are exposed to severe stress every season. Cho was also under pressure to get the team promoted to the K League Classic for the following season.

“At times, we get so much stress and pressure that it’s hard to bear,” said Jo Sung-hwan, manager of Jeju.

While Park Kyung-hoon, manager of Seongnam FC, was managing Jeju United, he got inflammation in the middle ear from severe stress. There have also been managers who died of bench stress before Cho. In 1999, while with the Busan Daewoo Royals, Shin Yoon-ki passed away while the team was competing for a playoff spot.