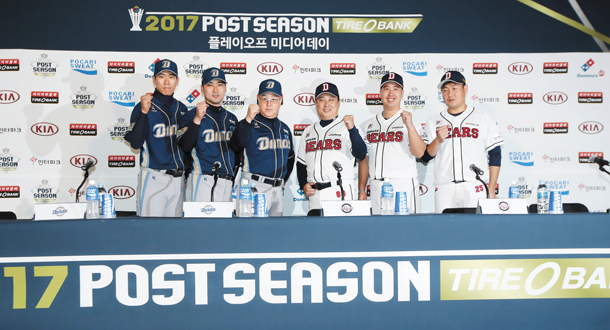 Unlike the past two seasons, when the NC Dinos have cruised into the second round of the playoffs, this season they faced a real fight. Having beaten the SK Wyverns in the Wildcard game, the Dinos went on to face the Lotte Giants in the first round of the playoffs. The Giants managed to hold the Dinos all the way to the fifth game of the series, before falling 9-0 at Sajik Baseball Stadium on Sunday, allowing the Dinos to once again advance to the penultimate series.

The Dinos will now have to face the Doosan Bears, the reigning champions, in the second round of the playoffs starting today at Jamsil Baseball Stadium in southern Seoul. This will be the third consecutive season that the two meet in the postseason. So far, the Bears have always come away on top.

Prior to the first game, the two teams held a media day at Jamsil Baseball Stadium on Monday.

“Since I first got appointed as manager three years ago, I’ve been at a media day with Kim Kyung-moon every season,” said Kim Tae-hyung, manager of the Bears. “Since our primary goal is to advance to the Korean Series, we’ve been working hard in a short period of time.”

In the past two seasons, the Bears were dominant against the Dinos. Though the Bears finished third in the regular season in 2015, they defeated the Dinos, who finished second, in the postseason to advance to the Korean Series. Last season the two teams met in the Korean Series. The Bears were even more dominant, sweeping the Dinos in four straight games to take home the trophy.

“No one would know how it feels to have that many runner-up finishes,” said Kim Kyung-moon, manager of the Dinos. “But throughout the time, I’ve had pride. This year, I want to learn what I can learn from manager Kim Tae-hyung and play great games.”

Nippert was an expected pick for the Bears, as he has appeared in the first game of most playoff series the Bears have reached in his seven years with the team. Jang’s start for the Dinos, however, was rather unexpected, as Jeff Manship’s name was discussed more often.

As Manship struggled against the SK Wyverns, giving up three runs in five innings, Kim Kyung-moon chose Jang, who only gave up one run in seven innings during the second playoff game against the Giants on Oct. 9.

“It’ll be different this year,” said Kim Kyung-moon. “Since it’s the players’ third year playing in the postseason, I feel like they’re a lot more calm. So this year, I’m expecting them to figure out a way to manage Nippert’s pitches.”

But there are many variables when it comes to short term games, as a standout performance from a player in the postseason can change the entire flow of the game. While the Dinos are on alert for Nippert, the Bears are most worried about Park Min-woo.

“Among the Dinos’ players, Park Min-woo is the most threatening player,” said the Bears’ Yoo Hee-kwan, who gave up eight RBIs and six hits to Park this season. “Once he gets on base, he has great base play. So he’s the most difficult player.”

Looking at Park’s position in the first playoff rounds, his role was more as the Dinos’ table setter, appearing as their first batter three times and second three times.

The second playoff round will be played in a best-of-five format and the winning team will play against the Kia Tigers, this year’s regular season champion, for the Korean Series title in a best-of-seven format.