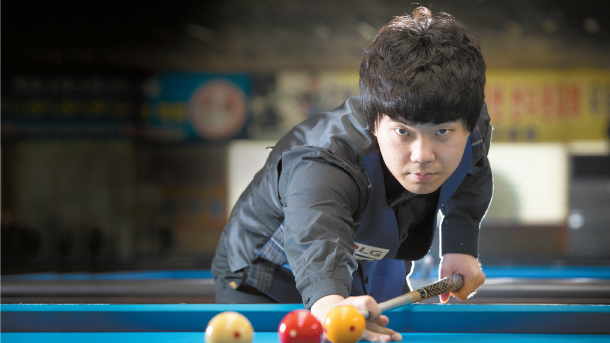 Kim Haeng-jik was victorious in the three-cushion World Cup event in Cheongju, North Jeolla, on Oct. 1, his second consecutive victory following a win in Porto, Portugal in July.

About six World Cup events are played around the world each year, with the top 100 players competing in each match. Since the World Cup first started in 1986, only four players - Torbjorn Blomdahl of Sweden, Dick Jaspers of the Netherlands, Daniel Sanchez of Spain and Frederic Caudron of Belgium - have won back-to-back World Cup events. After his victory in Cheongju, Kim has become the fifth member of that exclusive club.

Three-cushion billiards is a form of professional billiards where a point is scored for each successful carom, strike or rebound. A carom is when the cue ball successfully strikes two object balls. The player that scores the first 40 points wins. To be counted as a point, the cue ball has to contact three or more cushions before making contact with two balls.

Most billiards players don’t achieve much success until they are in their 30s, as it normally takes years to reach a high standard of play. Kim got off to a much earlier start than others, capturing his first senior event title while in eighth grade. During Kim’s junior career, he won a total of four Junior Championships and his high school, Maetan High School, established a billiards club to help support him.

Having first encountered billiards at age 5 as his father managed a billiards hall, Kim was destined to play the game. Once he graduated from Maetan High School, Kim joined BF Horster-Eck in 2011, an elite billiards team in the German Bundesliga.

“I wanted to be better,” Kim said. “I practiced at a billiards hall in Essen, which was two hours away in driving distance from Heidelberg, where I lived. There was a day where I played billiards for 20 hours. Without any earnings, I was given about 200,000 won ($177) a game, which only covered transportation costs. But I was still happy.”

Within only six years of joining the elite club, Kim is now the third-ranked three-cushion player in the world. Of the top-30 players in the world ranking, eight of them are Koreans, but Kim is ranked the highest.

From Kim’s continuous success, fans evaluate his ability as “Lionel Messi, Cristiano Ronaldo or Neymar,” if they were to compare billiards to football. Some fans even say Kim may be the “fifth” legendary three-cushion player, but Kim remains humble.

“Compared to them, I’m probably less than a hundredth,” Kim said. “I’m at a level where I just started. Blomdahl is creative, Sanchez has a great stroke. Also, Jaspers is like a human tape measure and Caudron is considered the world’s best offensively.”

Na Geun-ju of the Korea Billiards Federation said Kim’s strength is his consistent game management and how calm he is throughout the game.

Billiards is thought to be more popular in Korea than any other country in the world. About 22,655 billiard halls are managed in Korea and about 1.6 million people visit them every day.

“In Europe, there are only about one or two billiard halls per city, but in Korea, there’s one in every building,” Kim said. “Since there are a lot more people playing billiards, I think I improved faster competing against them.”

Though there are negative images of billiard halls in Korea, the sport was considered a royal game when it first originated in 17th century France.

“Now, both men and women play billiards,” Kim said. “Since a no-smoking policy will go in effect starting in December, anyone can enjoy the sport.”

Last month, the LG U+ Cup three-cushion Masters was held in Korea with a total purse of 200 million won and a winning purse of 80 million won. Normally, however, about 10 million won is rewarded to the winner of a World Cup event.

“Through there aren’t that many people who can make a living just by playing billiards, I want to try my best and promote national prestige through the game,” Kim said.

Next month, Kim will compete at the three-cushion World Championship in Santa Cruz, Bolivia. Last year, Kim came up short by losing to Sanchez.

“With a World Championship victory, I’ll continue straight to be the world’s best,” Kim said.