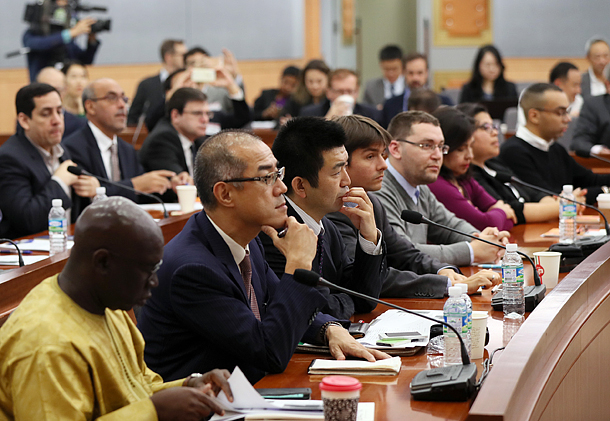 Diplomats and businessmen listen to a briefing for the Diplomatic Missions and Foreign Corporations on the PyeongChang 2018 Olympic and Paralympic Winter Games, held by the Ministry of Foreign Affairs in central Seoul on Friday. “Peace and safety are the key pillars” of the upcoming Olympics, Korean Ambassador for Public Diplomacy Park Enna said, adding that Korea’s “top priority is the safety and security of each and every national team, the Olympic family and all the spectators” visiting Pyeongchang, Gangwon. She added that the United Nations Olympic Truce Resolution, calling for an end to all conflict during the Games, will begin seven days before the opening of the Games and end seven days after they close. It will be adopted at the UN General Assembly on Nov. 13. [YONHAP]