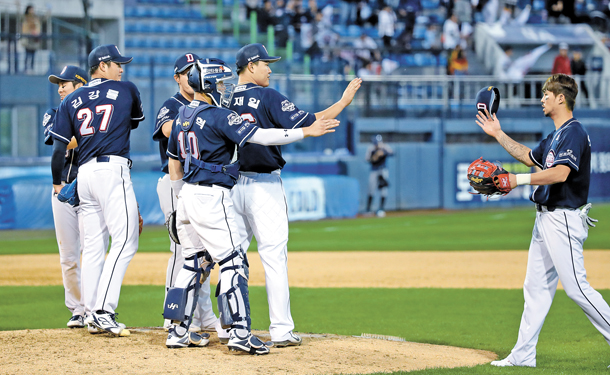 Doosan Bears players celebrate their 14-5 victory over the NC Dinos in Game 4 of the Korea Baseball Organization’s postseason series at Masan Baseball Stadium in Changwon, South Gyeongsang, on Saturday. [YONHAP]

In reaching their third straight championship final in the Korean baseball league, the Doosan Bears flexed some serious muscle.

The Bears slugged past the NC Dinos 14-5 on Saturday at Masan Stadium in Changwon, South Gyeongsang, and claimed their best-of-five second-round postseason slot in four games.

First baseman Oh Jae-il had a historic game, becoming the first player to hit four home runs in a postseason game. He knocked in nine runs, also a postseason record.

Cleanup hitter Kim Jae-hwan added a solo shot in yet another slugfest, as the Bears advanced to their third straight Korean Series. They won the past two championships and will face the Kia Tigers in a best-of-seven set that begins Wednesday at the Tigers’ home in Gwangju.

The Tigers, who got the bye to the final by virtue of having the best regular season record, must have taken notice after watching the Bears launch one long ball after another in this series. One could argue the Dinos simply didn’t pitch well and that the Tigers, who boast two 20-game winners in Hector Noesi and Yang Hyeon-jong, will be different.

If nothing else, though, the Bears’ fireworks in four games against the Dinos must have planted some seeds of fear into the Tigers’ pitching staff.

Oh was a one-man wrecking crew on Saturday. He had a pair of three-run shots early, which was already impressive, and added a two-run jack and a solo homer in later innings to cap off a memorable day. No one had even hit three homers in one postseason game before Oh went deep four times.

Oh said he surprised himself with the performance, especially after that fourth home run.

“I thought this was ridiculous, and even my teammates were asking me what was going on,” Kim said with a smile. “But records are made to be broken. I’d be okay if someone breaks those records.”

Oh will be playing in his third straight Korean Series, and he said nothing else is on his mind but trying to pull off a “three-peat” and also get a measure of personal redemption.

“The best part of today is that we reached the Korean Series,” he said.

Kim Jae-hwan, who had two home runs in Game 2 and another in Saturday’s Game 4, doesn’t need much redemption himself. He was 5-for-17 in the Bears’ run to the title last year, with two home runs, two RBIs and three runs scored.

Kim and Oh have hit cleanup and No. 5 all series, and the two left-handed sluggers will likely keep opposing pitchers up at night during the Korean Series.

In all, the Bears belted 12 home runs in four games in this series.

But make no mistake. This was far from just two horses carrying the day. The Bears pounded out 17 hits on Saturday, with every starter picking up at least one hit. By scoring 14 runs, they became the first team to score in double figures in three consecutive postseason games.

If you’re counting at home, that’s 50 runs in four games. Even in this offense-happy era of the Korea Baseball Organization, that’s outstanding production, mediocre pitching or not.