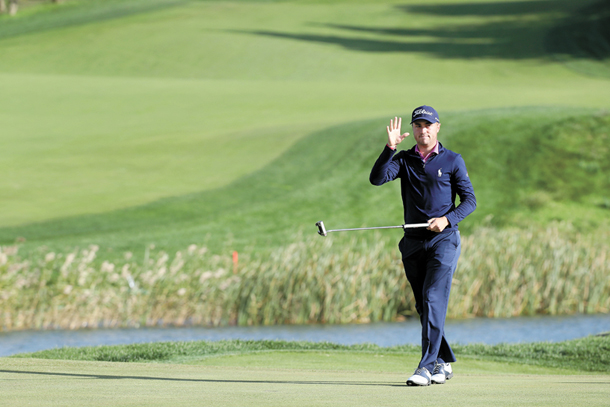 Thomas waves to the gallery after defeating Marc Leishman of Australia in the second playoff hole of the tournament. [YONHAP]

Justin Thomas of the United States defeated Marc Leishman of Australia in the second playoff hole to win the first CJ Cup at Nine Bridges in Jeju Island on Sunday. 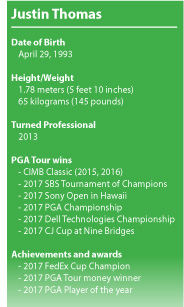 After a round of 63 in the first day, Thomas struggled to play under strong winds in the second day, shooting two over par, 74. Although Thomas lost his lead after the second round, a two-under-par round on the third day allowed him to take the sole lead again.

But heavy island winds made for an unpredictable final round until the end. Until the par-three 17th hole, three players were tied for the lead. Once Leishman dropped to eight under par by missing a 6-foot par putt, Thomas also missed his 10-foot par putt on the same hole to lose a shot. As Cameron Smith of Australia was already at eight under par, the three tied for the lead.

On the par-five 18th, Leishman hit the green on second for his last chance to take a two-shot solo lead. However, Leishman missed his 16-foot eagle putt and made a birdie, taking the sole lead by one.

But right after Leishman completed his round, Thomas, the final group of the day, also hit the green in second, even closer than Leishman’s shot. Thomas’ shot from 236 yards landed just 10 feet from the pin, but just like Leishman, Thomas, too, missed his eagle putt, forcing a playoff.

In the first playoff hole, both Thomas and Leishman pushed their tee shot right. While Thomas’ tee shot was in the right rough, Leishman’s went too far right, landing on the cart path. After given two free drops, Leishman made an aggressive club choice, hitting it through the trees to land on the fairway, getting him in even better position than Thomas for his third shot. 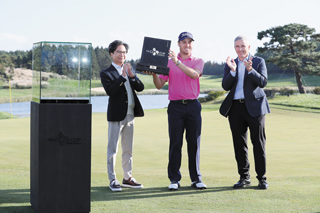 Then, Leishman hit the green on three, 11 feet from the green, but as he missed a short birdie putt, Thomas was given another chance.

In the second playoff hole, both players hit the fairway in regulation, but as Leishman hit his second shot into the hazard, the playoff was more in favor of Thomas. With 242 yards remaining, Thomas pulled out his wood to hit the green on his second shot. Although it missed the green, it did land just short of it, leaving him a birdie chance. 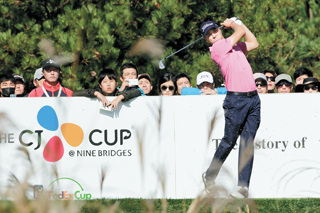 Justin Thomas of the United States watches his shot during the final round of the CJ Cup at Nine Bridges in Jeju Island on Sunday. [JNA GOLF]

As Leishman missed his par putt and Thomas made his 3-foot birdie putt, Thomas was declared champion of the first PGA Tour event in Korea, taking home $1.7 million. It is his first win this season and seventh career victory. His personal record remains last season, when he won five tournaments.

Kim Meen-whee hoped for a come-from-behind victory, as he started his final round tied for fifth at six under par. Rather, Kim shot an even par in the final day to finish tied for fourth, the best finish among the 17 Korean golfers in the field this weekend.

An Byeong-hun, who started the final round at five under par, lost his chance of climbing up the leaderboard by making a triple bogey on the first hole. He attempted a comeback with three consecutive birdies from the fifth to seventh holes.

In the back nine, he shot two more birdies on the 10th and 11th, but made a triple bogey on par-three 13th that blew away his chance at a top-10 finish this weekend.

With a final round score of four under par, An finished tied for 11th.