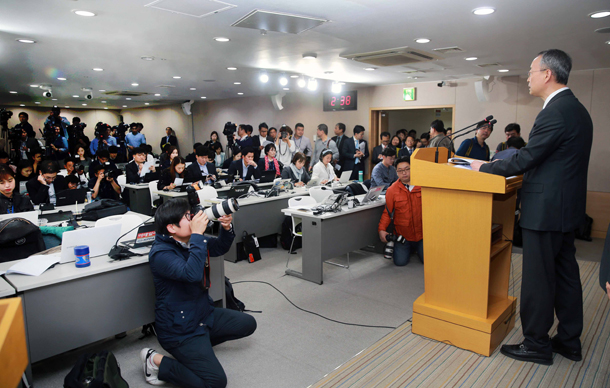 Paik Un-gyu, minister of trade, industry and energy, outlines the government’s road map for phasing out nuclear power during a press briefing at the Gwanghwamun government complex in central Seoul on Tuesday. [YONHAP]

The Moon Jae-in administration reaffirmed its commitment to weaning the country off nuclear power on Tuesday, presenting a road map in which the number of reactors in Korea would be reduced to 14 from the current 24 by 2038.

While the government hopes to transition to other sources of energy that are considered greener and safer in the long term, it also agreed to resume construction of two new reactors, Shin Kori 5 and 6, starting today, after President Moon suspended the project in June to allow a state commission to decide its fate.

Aside from Shin Kori 5 and 6, there were plans to build six more reactors, which the government will no longer pursue. Two other new reactors are already 90 percent complete and will go into operation as planned.

Paik reaffirmed the administration’s stance that it would not extend the life cycles of existing nuclear power plants. The government plans to close the Wolsong 1 reactor, in operation since 1983, before its initial shutdown date of 2022.

About 59.5 percent of the panel, which consisted of no nuclear experts, voted in favor of restarting construction, and 40.5 percent voted against.

Although a majority supported the project, 53.2 percent of the panel said the country should reduce its reliance on nuclear power, while 35.5 percent were satisfied with the current level.

Only 9.7 percent said the country should expand its nuclear energy development.

Minister Paik cited the survey in defending the government’s push for a nuclear phase-out.

“Reducing reliance on nuclear power is a global trend,” he said. “President Moon ran his campaign on this platform, and we judge that it was accepted by the people. We also understand the commission came to the same decision on the matter.”

In lieu of nuclear power, Paik said the government would increase the amount of electricity generated by renewable energy sources to 20 percent from the current 7 percent by 2030.

Nuclear power currently generates about a third of Korea’s electricity.

Under the government’s road map, the number of nuclear power plants will peak at 28 in 2022, with the 24 currently in operation and four under construction.

Afterward, the government expects to decommission plants one by one based on their intended lifespan until there are 14 left by 2038.

Asked about the possibility that Moon’s energy policy could be overturned by a conservative government in the future, Paik stopped short of giving a direct answer, only saying the government would toughen safety standards and inspections of aging nuclear power plants.