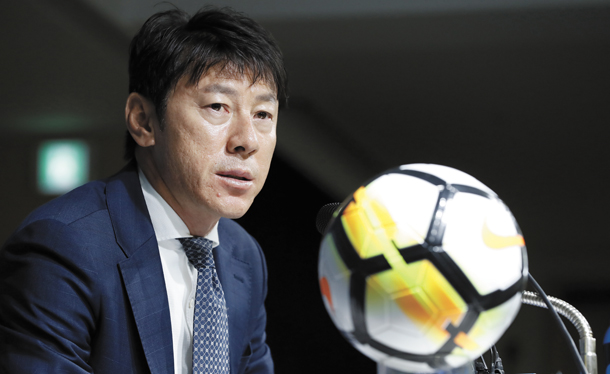 Shin Tae-yong’s experiment with foreign-league players appears to be over.

On Monday, the head coach of the Korean men’s football team announced his latest roster for upcoming friendly matches, bringing back players from the Korean league.

Although the team secured a spot in next year’s FIFA World Cup, two losses against Russia and Morocco in October friendlies gave fans great trepidation about how the team might perform at the World Cup. Since Shin was appointed head coach in July, he hasn’t won a single match, with two ties and two losses.

“I believe this is the best team I’ve had as a head coach,” Shin said during a press conference at the Korea Football Association’s headquarters in Seoul on Monday. “I admit that we haven’t been playing well. We need to experience our competitiveness against Colombia and Serbia, the teams playing at the World Cup, at home.”

The roster during the friendlies did not include any players in the K League. Lee Jeong-hyeop of Busan IPark is joining the national team for the first time since March. Lee was a key player when Korea finished runner-up in the 2015 Asian Cup.

Last year, when Lee was added to the national team for the World Cup qualification matches, he was a surprise addition because he mainly plays in the K League Challenge, Korea’s second-tier league. Despite fans’ concerns, Lee managed to score five goals in 16 matches.

Among Shin’s picks, Jeong Seung-hyun of Sagan Tosu for defense was a surprise. Jeong made his professional debut with Ulsan Hyundai FC in 2015 and became the team’s core defensive player, but he left the club in June for Sagan Tosu. This is the second time Jeong has been selected by Shin after last playing for Korea at the Rio Olympics.

“I went to the 2016 Rio Olympics with Jeong Seung-hyun,” Shin said. “I’m aware of his strengths and weaknesses. He’s a stopper but also has great build-up.”

In the team’s most recent friendlies, Korea’s defense was considered weak, as they allowed seven goals. This time, Kim Ju-young of Hebei China Fortune FC and Kim Ki-hee of Greenland Shenhua FC, considered the weakest defenders, were excluded from Shin’s roster.

As usual, EPL darlings Ki Sung-yueng of Swansea City, now fully recovered from a knee surgery, and Son Heung-min of Tottenham Hotspur were added to the roster.

Son is expected to be the team’s top performer. On Oct. 23, he scored his first goal of the EPL season against Liverpool FC and then made two assists during the Spurs’ English League Cup match against West Ham last Thursday. During the press conference, Shin mentioned the possibility of changing Son’s position to center forward, the position Son normally plays for Tottenham Hotspur.

“He has played great in a two-top formation for Tottenham,” Shin said. “I got hints from the two matches Son played, but there are variables depending on who assists Son.”

The Korean men’s football team will play against Colombia at Suwon World Cup Stadium on Nov. 10 and against Serbia at Munsu Football Stadium in Ulsan on Nov. 14.

After the friendly matches, they will compete in the East Asian Football Federation E-1 Football Championship in Tokyo, where they’ll face Japan, China and North Korea, in December.

The team’s coaching staff will include foreign hires starting next month.