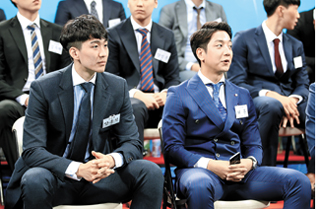 Yang Hong-seok, left, and Heo Hoon wait to get drafted in the 2017 KBL rookie draft at Jamsil Students’ Gymnasium in southern Seoul on Monday. [YONHAP]

Heo, whose father is head coach of the Korean national basketball team, was the first selection by head coach Jo Dong-hyeon.

Currently playing basketball at Yonsei University, Heo, who plays guard, is considered short for a basketball player, but was highly evaluated for his smart play.

This year, after leading his team to the championship victory, he was named MVP of the Korean University Basketball League Championship.

“I feel honored to be drafted first,” Heo said. “I’m thankful to my mom, dad and my brother for supporting my basketball career. I’m confident [I’ll play well] in the professional league. I was told that I’m able to play starting in the second round and I believe that game is against the Seoul SK Knights. I’ll play well and surprise the KBL.”

In the Korean University league, Heo scored 19.2 points with 6.2 assists and 2.5 rebounds per game this season. Heo also played for the senior national team in June.

Heo’s older brother, Heo Ung, is also a basketball player and was drafted fourth by Wonju Dongbu Promy in 2014. Since Heo Woong is currently fulfilling his military duty, once he returns to the KBL for the 2018-19 season, the KBL may have its first “brother match.”

Though the Changwon LG Sakers originally had second pick, the Sonic Boom ended up getting first and second pick, as they were given second pick by allowing the Sakers to recruit forward Cho Sung-min from their team last season.

This is the first time since Anyang KGC in 2010 for a team to earn the first two picks in the rookie draft.

As a result, Cho returned to the stage shortly after drafting Heo, for his second draft. Cho’s second pick was Yang, a freshman at Chung-Ang University.

Yang represented Korea at the 2017 FIBA Asia Cup Lebanon in August, where the team won a bronze medal. This season, Yang was an outstanding forward in the collegiate league, averaging 20.1 points and 8.1 rebounds per game.

“I challenged myself to the professional league earlier than others,” Yang said. “I won’t be satisfied about being a professional basketball player.”

Yoo Hyun-jun, a guard from Hanyang University, was drafted third by Jeonju KCC and Ahn Young-joon, a forward at Yonsei University, will be wearing the Knights’ uniform.

This year, a total of 44 players were in the rookie draft and 27 players were drafted up until the fifth round.