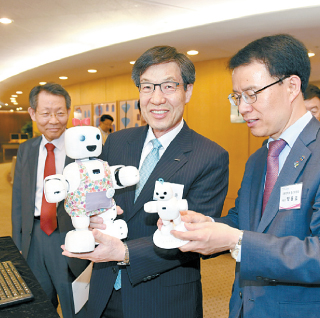 Posco is setting an example for shared growth with other companies, based on mutual cooperation and harmony of labor and management.

On Sept. 10, Posco started to gradually raise outsourcing costs for three years to increase the wages of employees working at companies affiliated with the nation’s largest steelmaker.

The company increased outsourcing costs by 100 billion won ($88.9 million) this year. 15,000 people working in Pohang and Gwangyang are expected to benefit from the wage hike, leading to the vitalization of the local economy.

Posco’s decision was possible after the labor force and the management came to a consensus to solve the issue of social polarization. Posco is proud to set a good example based on mutual trust.

In April, Posco signed a business agreement with the Ministry of Trade, Industry and Energy, and the Korea Institute for Advancement of Technology, to expand technology sharing. Many representatives of small and medium-sized enterprises (SMEs) were also present.

In August, Posco decided to put 550 billion won towards funding mutual cooperation. A total of 500 billion won is put aside for 15 first and second affiliates to provide them with low-interest loans, plus 50 billion won for subsidizing cash payments for affiliates.

Moreover, as a solution for capital shortages of small and medium-sized firms before national holidays including Lunar New Year and Chuseok, Posco will provide funds in advance. To provide stability to small and medium-sized enterprises, Posco is paying all suppliers in cash within 3 working days after the company receives the product.

Posco also started the “Idea Marketplace” in 2011 and discovered 142 companies through the program. The 13th iteration of the event was held on June 21 this year, and Posco selected 10 ventures to support. The program aims to provide young entrepreneurs with financial support to cover start-up expenses and to enable stable growth.