The Korea Baseball Organization announced Tuesday that the Hanwha Eagles have signed Han Yong-duk as their new manager on a three-year contract worth 1.2 billion won ($1.1 million). 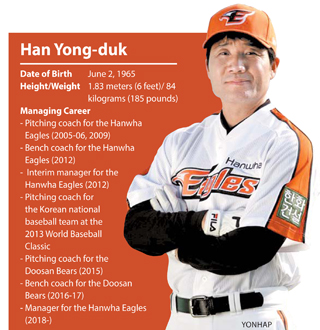 Up until late Monday night Han was the bench coach for the Doosan Bears. He is the Eagles’ 11th manager and the first since Yu Seung-an in 2004 who is a former Eagles’ star.

“I feel like I’m going back home,” Han said. “I feel honored to be the Eagles’ manager. I’m glad, but I feel the weight on my shoulders. I’ll have a lot of homework ahead of me. I hope to solve the problems by meeting with the club associates, coaches and the players.”

Han was first offered the position at the end of the regular season under the guidance of the Eagles’ general manager Park Jong-hoon. However, as the Doosan Bears advanced to the Korean Series, the announcement had to be postponed.

“I couldn’t think about anything because I was focusing only on the Korean Series,” Han said.

The Eagles hope that the addition of Han will mark a change of fortune for the beleaguered franchise. The 2017 season was a continuous struggle for the team, which failed to advance to the postseason for the tenth consecutive year. Having limped to the finish line with an interim manager, Lee Sang-kun, from the end of May, the Eagles finished in seventh place with 61 wins, 81 losses and two ties.

After his retirement, Han started his coaching career as the Eagles’ pitching coach in 2006. Once Han Dae-hwa, former manager of the Eagles, stepped down from his position in 2012, Han served as the interim manager, recording 14 wins, one tie and 13 losses. Upon completion of the 2012 season, Han left to the United States, spending a year at the LA Dodgers Baseball Academy. In 2014, Han worked as the Eagles’ general manager’s special assistant, but after a year, he joined the Bears, serving as the Bears’ pitching coach and bench coach.

“I couldn’t prepare anything because the Series ended yesterday,” Han said. “The final training starts tomorrow, but I don’t think I’ll be able to join them right away.”

But Han has already started his job as the Eagles manager, forming his coaching staff. Han has decided to bring back Eagles’ former franchise starters - Song Jin-woo and Chang Jong-hoon - this time as a bench and pitching coach. Song and Chang are the best pitcher and batter that the Eagles have ever produced.

“The addition of Chang Jong-hoon and Song Jin-woo as coaches was a request I made personally to the Eagles,” Han said.

By bringing back the Eagles’ all-time best players as coaches, Han hopes to see the whole squad work together as a team.

In addition, the two coaches that worked with Han while serving as a bench coach for the Bears - battery coach Kang In-kwon and base running coach Jeon Hyung-do - will join the Eagles. Again, the coaches played for the Eagles.

“There are a lot of good players, but I felt like some players weren’t in the right place,” Han said. “Based on three years at Doosan, I felt that the players are dedicated to the team. Now, Hanwha lacks that. I wanted Hanwha players as coaches because I thought this will help the players bind as a team.”

Throughout the recruiting process, Hanwha emphasized the importance of player development. Rather than renewing contracts with foreign FA players, the Eagles put more weight on developing players.

“The club will provide a lot of support in developing players,” Han said. “Seosan Baseball Training Center will be expanded. I’m planning on strengthening teamwork by balancing the former and younger players.”