Noh is ready for a break - in the military

Noh is ready for a break - in the military

Noh Seung-yul has never had a break in the 20 years since he picked up his first golf club, but now he believes he finally has been given a chance to relax - by going into military service. 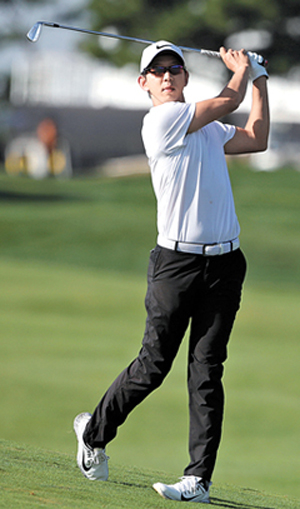 Noh Seung-yul watches his shot during the first round of the Genesis Championship at Jack Nicklaus Golf Club Korea in Songdo, Incheon on Sept. 21. [NEWS1]

“Since I started golf, there wasn’t a day where I didn’t touch the golf clubs,” Noh said. “Even on holidays, I practiced. So going to the military somewhat feels like going on a vacation. It will be difficult to be a soldier, but since I’ve been training for the past 20 years, I think I’ll be fine. I expect to get stronger mentally and physically.”

Noh, a native of Sokcho, Gangwon, started golf at age 7.

As part of his daily training routine, Noh woke up at 4:30 in the morning and ran three kilometers (1.9 miles) by the beach.

Like Choi Kyoung-ju, Noh practiced hitting shots at sandy beaches, which helped him improve his bunker shots. He was ranked fourth in sand saves on the PGA Tour.


“While in elementary school, Seung-yol trained early in the morning and after school, he went to a driving range by taking an hour-long bus,” said Noh’s father. “Seung-yol was the only child who went to practice by bus.” 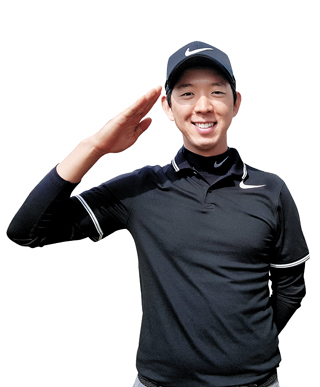 Once Noh’s father quit his job to support Noh, he no longer had to take the bus, but this gave his family financial difficulty.

To save money for accommodation, there were days when he slept in his car.

While in middle school, Noh finished in the upper rank at KPGA Tour’s GS Caltex Maekyung Open, and at age 16, he decided to turn professional. Since there was an age limit on the domestic tour, Noh left to play on the Asian Tour. In his rookie year on the Asian Tour, Noh won the Midea China Classic.


In addition to the Asian Tour events, Noh played on the European Tour, and starting in 2012, he played on the PGA Tour. Since Noh’s mid-teens, he lived in foreign countries, but never once considered settling in one of them.

Indeed, Noh had the taeguk, or Korean taiji symbol, embroidered on his golf clothes throughout the Sochi 2014 Winter Olympics. 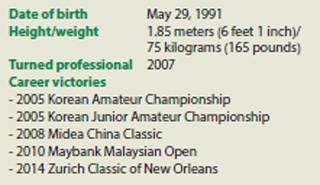 “I’m really excited that the PyeongChang Olympics are being hosted in my home,” Noh said. “I also want to play at the Tokyo 2020 Olympics.”

On the PGA Tour in 2012, Noh became the first Korean golfer to hit over 300 yards. At the time, he was ranked 19th in driving distance on the PGA Tour.

But rather than his drive, lately, he has gotten better with iron shots, with his par-3 scoring average ranked sixth on the PGA Tour in the 2016-17 season.

“For the past two to three years, my driver wasn’t going straight, so I have to stop the bleeding from the iron shot,” Noh said. “And this allowed my iron shots to get better. I can hit different shots depending on the hole location and the shape of the greens.”

Still, Noh is considered the best ball striker among Korean golfers. While many golfers want to have Noh’s great ball striking, for Noh himself, he wants to have Bae Sang-moon’s easy-going personality.

“When you play golf, you can’t rely on scores all the time,” Noh said. “Once you do, you start to fall behind.”