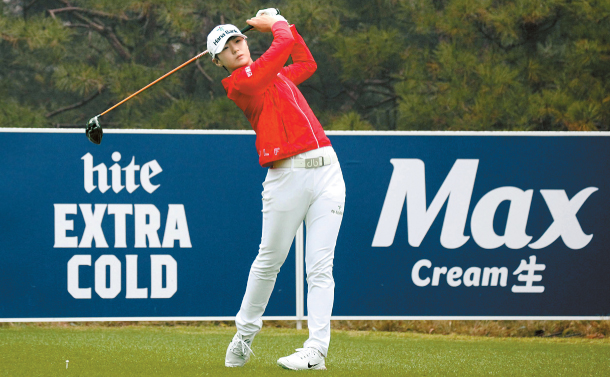 Park Sung-hyun hits a tee shot at the 18th hole in the 18th Hite Jinro Championship on Nov. 3. Park is the new No. 1 female golfer in the Rolex Women’s World Ranking as of Monday. [YONHAP]

Park Sung-hyun is the new No. 1 female golfer in the Rolex Women’s World Ranking.

Last weekend, Park competed at the 18th Hite Jinro Championship, a KLPGA Tour event. Although she finished tied for 19th, shooting even par all four rounds, after the tournament, she was told she’ll become the new No. 1 ranked golfer in the Rolex Women’s world ranking once it gets updated on Monday according to the projected standing.

For Ryu So-yeon, the former No. 1 ranked female golfer, to maintain her position in the top spot, she had to finish inside the top six. Rather, Ryu shot one over par in the final round, finishing tied for 33rd at seven under par. Due to this, the top spot, which Ryu kept for 19 consecutive weeks, has changed for the fourth time this season, this time going to a rookie.

“I didn’t know that,” Ryu was quoted as saying on Reuters. “I don’t really care about it. It’s just a title. It’s great to be number one, of course, but the more important thing is how I’m playing for the present.”

Since Ryu became the top ranked female golfer, she missed a cut at the Portland Classic and only had two top-five finishes in the last ten tournaments.

“Because of number one, a lot of expectation levels went up, but right now, I want to win a tournament more than keep my position,” Ryu was quoted as saying by Reuters.

Upon completion of the 2016 season, Park announced her plan to play on the LPGA Tour and her goal of becoming the top golfer within three years. But within less than a year, Park managed to achieve her dream.

“I’ll only be able to feel it once I see it myself,” Park said after the round on Sunday. “It’ll be good to be ranked No. 1, but in golf, I don’t think there’s such thing as the end. I think it’s important for me to have the attitude that I can improve and how much effort I put into myself to get better.”

Having already won two tournaments, including a major tournament, Park has become the first rookie to be ranked No. 1 since the Rolex World Ranking system was first introduced in 2006. Now that there are only two tournaments remaining this season, Park’s next goal is winning the Vare Trophy, awarded to the player with the lowest scoring average for the season. Since Lexi Thompson of the United States, who leads on the LPGA Tour’s scoring average, finished the tournament at seven under par, Park is now only 0.022 strokes behind Thompson’s scoring average of 69.147. Park’s success in her rookie campaign is considered as good as Nancy Lopez in 1978, who won nine tournaments and swept all four awards on the LPGA Tour in her rookie season. Starting on Thursday, Park will play at Bluebay LPGA China, while Ryu and Thompson will be taking a week off. All three players will compete at the season finale, the CME Tour Championship.

“I play in tournaments thinking that every tournament is important,” Park said. “To be more specific, I try to focus on each hole. And I’ll try to do so in the remaining tournaments.”

Still, Ryu leads in the Rolex Player of the Year points standing at 162, 14 points ahead of Park. Since 30 points are awarded to the winner in each of the LPGA Tour events, Park has a shot at topping this category.