The World Cup snub that made Lee Myung-joo

The World Cup snub that made Lee Myung-joo

In 2013, Lee Myung-joo was the most promising player in the Korean football league. That year, his team, the Pohang Steelers, became the first Korean club in history to earn a double title, dominating the K League Classic season and winning the Korean FA Cup championship title. 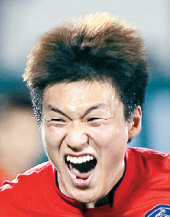 Lee, too, was riding high. The following season, he became the first player in the K League to either score or assist in 10 consecutive matches, making five goals and nine assists. With such numbers, a spot on the national men’s team seemed assured.

But when the time came for Coach Hong Myung-bo to assemble his squad for the 2014 FIFA World Cup, Lee was excluded from the roster.

It was a bitter pill to swallow, and after the decision, Lee left the K League for the United Arab Emirates, where he joined Al Ain FC.


“No matter how good of a player I was, it was obvious that the head coach wanted to take the players he wanted,” Lee said, reflecting on the slight. “So I don’t hate Coach Hong Myung-bo. I didn’t get hurt, but I did have regrets about not getting added on the national team roster. Playing in the World Cup is every footballer’s dream, and I wasn’t able to achieve my dream when I was at my best.”

This year, Lee returned to Korea to join FC Seoul. In his first match in July, he made one assist to help Seoul to a 2-1 victory. Fans once again set their expectations high for Lee. 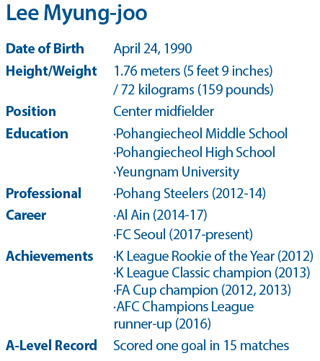 But the 27-year-old midfielder failed to hit his stride. In a match against Gwangju FC, he tore the ligament on his right ankle, putting him out of commission for two months.

After returning from his injury in September, Lee slowly worked his way up to 100 percent, and finally, during a match against Ulsan Hyundai on Oct. 28, he scored his first goal since returning to the K League.

Shin plans to utilize Lee in two friendly matches, against Serbia tonight and Colombia on Nov. 14. With seven months left until the 2018 World Cup, Lee has an opportunity to potentially join the national team when it competes in Russia.

This time, his prospects are better than they were three years ago. Shin appears to be fully confident in Lee’s ability and even considered adding him to the team for several friendly matches in October, but he was unable to play due to his injury.

The two demonstrated great chemistry during Lee’s brief stint on the national team in September 2014, when he played in two friendly matches against Venezuela and Uruguay while Shin was interim coach. Lee started in both matches and scored a goal against Venezuela.

“I went through a hard time with my injury,” Lee said, “but I’m glad to return to the national team.”

Next month, Lee will begin his two years of mandatory military service, where he will have to play for either Sangju Sangmu or Asan Mugunghwa, the military clubs, but it will not preclude him from joining the national team during the World Cup.

“Until I retire, I’ll never give up my dream of playing at the World Cup,” Lee said. “It’s a stage I want to get to at least once. The Russia World Cup will probably be my last World Cup to play while I’m at my best as a football player. If I continue without an injury, I may get a chance.”