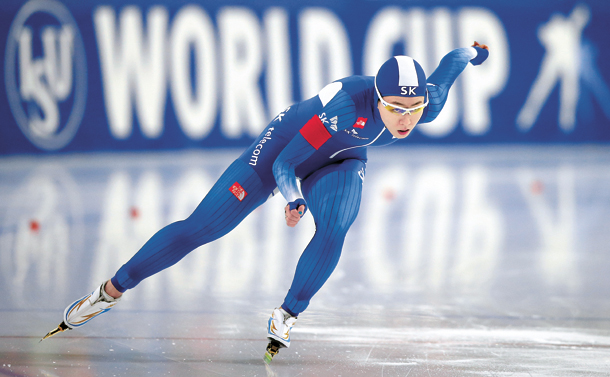 Lee Sang-hwa focuses in the women’s 500-meter race during the ISU World Cup at Thialf ice rink in Heerenveen, Netherlands on Saturday.[AP/YONHAP]

Until the halfway point, Lee stayed in the middle of the group, but on the final two laps, he raced past Mantia to take the lead. Last season, Lee was ranked first in men’s mass start.

Since the mass start race will make its Olympic debut at PyeongChang next year, fans hope Korean skaters will dominate the category.

Both Lee and Chung finished the event on Sunday, racing in the men’s 5,000-meter division B, finishing 11th and seventh.

During the second 500-meter Ladies Division A race on Saturday, Lee finished at 37.53 seconds, 0.2 seconds behind Kodaira, making her the only Korean individual medalist, since Kim Min-sun finished sixth with a time of 38.02 seconds and Kim Hyun-yung finished 17th with a time of 38.52 seconds. Lee raced in the tenth group, paired with Kodaira, and started the first 100 meters in 10.40 seconds, which was 0.07 seconds behind Kodaira. Though Lee was slower in the first 100 meters, she managed to keep up with Kodaira in the remaining 400 meters.

While Lee reduced her time in the second race by 0.07 seconds, Kodaira was 0.04 seconds slower compared to her time in the first race. Based on the average time of the two races, the two skaters were only 0.11 seconds apart, with Lee slowly closing the gap against Kodaira.

Last season, Lee came up short of Kodaira in all the international events: ISU World Cup races, World Championships and at the 2018 Asian Winter Games in Sapporo. Though Lee finished behind Kodaira in the season opener, she has shown potential in defending her title in the 500-meter race for the third consecutive Olympics, as she slowly closed the gap against Kodaira. In addition to the women’s 500 meter race, Lee also raced in the women’s 1,000 meter Division B, finishing third with a time of 1:16.10. Kim also competed in Division B and finished eighth.

And the women’s team concluded the weekend by adding another medal, winning a bronze in the women’s team sprint race. The trio of Kim Min-sun, Kim Hyun-yung and Park Seung-hi finished the race at 1:28.11, 1.49 seconds behind Russia and 0.001 seconds behind Norway. The team’s sprint race is an official event in the ISU World Cup Speed Skating but is not an Olympic event. Each team races three laps, starting as a team just like in team pursuit, but a skater drops out after each lap, leaving only one skater in the final lap of the race.