Once a hot prospect for FC Barcelona, Korean footballer Lee Seung-woo is pursuing two goals these days: Winning a starting spot at his Italian club Hellas Verona and earning a national team selection. 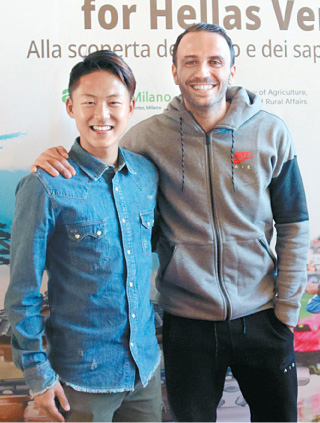 Lee Seung-woo of Hellas Verona, left, poses for a photo with Giampaolo Pazzini, the team captain, during a Korean food event in Verona, Italy. [YONHAP]

Lee joined the Serie A club, currently just 19th in the 20-team table, this summer after spending seven years with La Masia, a renowned youth program by Spanish giants Barcelona. The 19-year-old forward, however, is going through hard times.

Lee has so far featured in only four matches for Verona, all as a second-half substitute, and has played only 61 minutes total. Lee, however, said he isn’t disappointed and will take steps to win a starting spot.

“I knew from the first place that becoming a starting member for Verona wouldn’t be an easy task,” Lee said in an interview with Yonhap News Agency on Wednesday. “I don’t want to rush. I will just keep working to win the competition against experienced players.”

Lee said whether he plays or not he aims to become a player who can help the team. Verona are currently in the relegation zone after collecting only one win, three draws and eight losses in 12 matches. They’ve scored only eight times while conceding 26 goals.

“The season is long and we’ve yet to reach the halfway mark,” he said. “We have good players here and our team atmosphere is not that bad. So, I think we’ll play better.”

Lee said he is satisfied with his life in Italy, although training here is more intensive than in Spain.

“I don’t have big difficulties adapting to the environment here maybe because Italy and Spain have similar cultures and languages,” he said. “Everyone here is friendly and they’re good people, so I’m satisfied.”

“I also have my own fortes, so if I can show that on the pitch, there’ll be no problem,” he said. “The coach [Fabio Pecchia] always tells me to play with confidence. I’m learning many things from him.”

Lee on Wednesday attended a Korean food event, hosted by the Korea Agro-Fisheries & Food Trade Corp., introducing the cuisine from his native country to his Verona teammates.

“Team captain Giampaolo Pazzini is former Italy national team member and is very experienced, so he gives me lots of advice,” he said. “Franco Zuculini is from Argentina, so I talk to him a lot.”

Lee represented Korea at various youth levels, most recently at the FIFA Under-20 World Cup, but has yet to play for the senior side. He said playing for the Taeguk Warriors has been his dream since childhood.

“Next year, we have the World Cup and other major tournaments,” he said. “If I play many matches with Verona and have good performance, I think I’ll get the opportunity. I don’t want to miss it.”

Korea, led by head coach Shin Tae-yong, ended their six-game winless streak after beating Colombia 2-1 last week. Lee said the national team’s solid performance is good news for him even though such results could make Shin stick to existing members.