Three of the new executives for the Korean football federation on Friday vowed to work together through stormy times in national football. 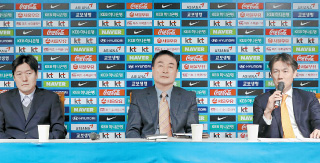 Their appointments were announced on Nov. 8 as part of the KFA’s reshuffling, and they were approved during the KFA’s general assembly on Thursday.

They’ve joined an organization faced with the senior national team’s mediocre performances on the field and a corruption scandal off the field.

“I don’t think it’s something that will change overnight, and everyone at the KFA must put in sincere efforts,” Hong said at the introductory press conference. “I’ll try to create a professional working environment conducive to success, and to bring out the maximum potential in everyone.”

One of Korea’s greatest players, Hong, 48, has resurfaced to take over one of the most powerful positions in Korean football administration, putting behind an up-and-down coaching career in the process.

Hong coached Korea’s under-23 squad to a bronze medal at the 2012 London Games for the country’s first Olympic medal, but things went downhill from there. He took over the senior national team before the 2014 FIFA World Cup, and Korea vastly underperformed, suffering a group stage exit with a draw and two losses. Hong resigned soon afterward.

He then took the reins at Hangzhou Greentown in China in late 2015, but they were relegated from the Chinese Super League to China League One on Hong’s watch in 2016. He stepped down in May this year.

Hong was the captain for the Korean team that reached the semifinals at the 2002 World Cup. With 136 caps, Hong is one of nine Koreans in the “Century Club,” for players who have appeared in 100 or more international matches for their country.

Following Hong’s appointment, critics pointed to his lack of experience in administration and doubted he was the right man for such a high-ranking job.

Hong said he was aware of those reservations but he’ll try to silence his detractors.

“I want to make sure people’s concerns won’t lead to disappointment,” he said. “I know Korean football has been taking a beating from fans, and I had a clear idea of what I wanted to do to help steer the sport in the right direction.”

Hong said being a coach and an administrator may appear to be totally different, but both positions require leadership skills and an ability to see the big picture.

“I know I can’t do anything alone here,” he added. “I have so much to learn, and I’ll try to pick brains of my KFA colleagues who have been here a long time.”

Hong said he has put aside any coaching ambitions and will reject whatever coaching offers that may come his way.

“This is a new challenge for me,” Hong said. “I’ve taken up a job that others would have shunned, because I wanted to find out what had gone wrong and fix it the best I can.”

Choi, 51, is a former national team defender who had been coaching Dong-A University since 2000. He played at the 1994 and 1998 World Cups, and like Hong, he threw himself into the administrative side of football for the first time.

“It’s an honor to start working with the KFA, and I’ll do the best I can to build on what my predecessors have done for the development of football,” Choi said. “During my time here, I’d like to see the national team recapture the glory of the 2002 World Cup, when we reached the semifinals. I think it’s possible.”

Lee, who turns 46 on Saturday, has extensive coaching experience in China, having served on the bench at Shenzhen FC, Yanbian Funde FC and Tianjin Teda. As a player, Lee represented the country at the 1992 and 1996 Olympics and the 1998 World Cup.

He will be working closely with Park Ji-sung, the former national team captain recently appointed as chief of the KFA’s youth football strategy department.

“I’ve heard quite a bit about problems with our youth football, in terms of systems and policies,” Lee said. “I hope to be able to provide youth football coaches with sound advice, so that they’ll nurture great players for our game’s future.”

Lee said he was offered a coaching job and a scouting position before ultimately accepting the KFA position. He said he won’t be going anywhere until he puts in some work and produces concrete results for the KFA.