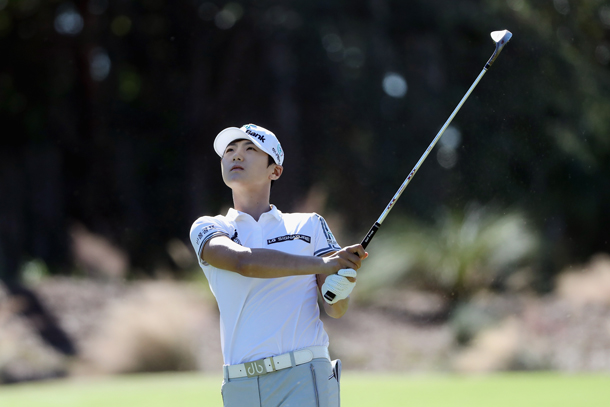 Park Sung-hyun watches her shot during the final round of CME Group Tour Championship in Naples, Florida on Sunday. [NEWS1]

The LPGA Tour, which ended on Sunday with the CME Group Tour Championship in Naples, Florida, had 33 events this year and 11 Korean golfers won 15 of them. 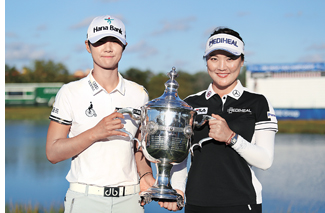 Park Sung-hyun, left, and Ryu So-yeon hold the trophy for the Player of the Year after the CME Group Tour Championship in Naples, Florida. [YONHAP]

Upon completion of the tournament, the Tour’s season-long race award winners were announced.

As expected, it took until the 72nd hole for the title winners to be announced.

Thompson’s disappointing finish in the season’s very last tournament allowed Park Sung-hyun to become the first rookie in 39 years, since Nancy Lopez in 1979, to win three awards - Rookie of the Year, the money title and Player of the Year.

“I don’t know what to say,” Park said. “My original goal was to win the Rookie of the Year award, but after winning the money title, I think I played well this season. It’s like a gift. This year went by really fast. I didn’t have any time, but looking back, it’s a year where I want to compliment myself.”

Park had a chance to top the season-long Race to CME Globe and take home the $1 million bonus, but finished tied for sixth at 12 under par, winning $73,411.

She played a bogey-free round of 69 on the last day.

“It wasn’t a bad round,” Park said. “But I lacked in my putting. Since I played so well in the first two rounds, a lot of my fans had high expectations. And I did too. It hurts to not play as well as I expected and I feel bad.”

This amount allowed Park to win the 2017 LPGA Tour’s money title, earning more than $2.3 million. Park became the first rookie since Shin Ji-yai in 2008 to win the money title as a rookie on the LPGA Tour.

The LPGA Tour had two golfers, Park and Ryu So-yeon, win the Player of the Year award, which has never been done on the LPGA Tour.

Since Ryu finished tied for 30th on Sunday, Park and Ryu were tied for Player of the Year. This was Ryu’s second award on the LPGA Tour, since winning Rookie of the Year in 2012.

Despite a runner-up finish, Thompson had the best season of her career, winning the Vare Trophy, awarded to a player with the lowest scoring average, and taking home $1 million by winning the Race to CME Globe Point.

In addition, upon completion of the tournament, Ko Jin-young’s agency, Galaxia SM, announced that she will play full time on the LPGA Tour starting in 2018.

Thanks to her victory at the LPGA KEB Hana Bank Championship in October, Ko earned a full seed to the LPGA Tour for 2018. Ko finished the weekend tied for 16th at nine under par.

“I’ve been dreaming of playing on the LPGA Tour since I started golf,” Ko said. “I decided to further challenge myself to achieve that goal and even bigger goals.”