Park’s trial for bribery resumes without her

Park’s trial for bribery resumes without her 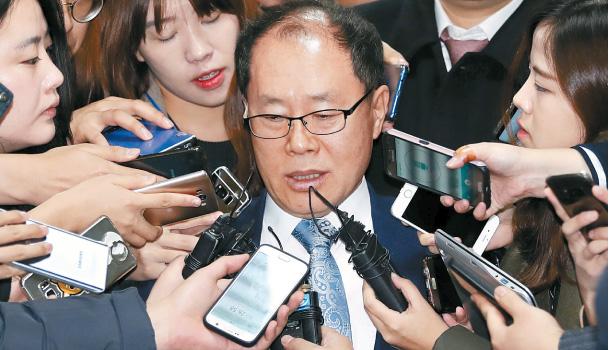 Reporters question Cho Hyun-kwon, one of the court-appointed lawyers for former President Park Geun-hye, as he walks out of the Seoul Central District Court on Monday. [YONHAP]

The bribery trial of former President Park Geun-hye resumed Monday after more than a month of her boycotting any proceedings. The disgraced leader was a no-show.

The Seoul Central District Court hearing at 10 a.m. Monday followed a 42-day suspension after Park’s lawyers resigned to challenge the integrity of the court. Earlier Monday morning, Park submitted a letter through the Seoul Detention Center, where she is being detained, to explain that she would be absent due to poor health.

The court delayed the proceeding. If Park does not attend the next scheduled hearing, the court will make a decision on whether it will proceed with the trial without her.

In addition to the letter, the detention center submitted a report on Park’s health. It said Park is being treated with painkillers for back and knee conditions. “Park also made clear that she will not attend the trial,” the report said. “Taking into account her status as a former president, it is difficult for the center to compel her.”

After a 10-minute recess, the court postponed the hearing to today.

“Instead of going forward with the hearing, we want to explain to her that a trial in absentia is possible if she continues to refuse to attend, putting her defense right at a disadvantage,” Judge Kim Se-yun said. “We want to give her an opportunity to think about this. If she continues her boycott, the court will decide whether the trial will proceed in her absence or not. We will make a decision tomorrow.”

The court also said an accused in a criminal trial has a duty to attend his or her trial. “We don’t see proper grounds for her absence based on the report by the detention center.”

Park, Korea’s first democratically-elected leader to be removed from office, is standing trial for bribery. Although she did not receive money directly, prosecutors concluded that she received bribes from conglomerates in collusion with her longtime friend Choi Soon-sil. The total amount of bribes cited in her April indictment was 59.2 billion won ($54.44 million).

Challenging the integrity and fairness of the court, Park started her boycott on Oct. 16, claiming she was a victim of “political retaliation.” The move was made after the court issued an additional warrant to the prosecution to grant its request to extend Park’s detention until next April.

All seven of her lawyers resigned to protest the court’s decision to extend Park’s detention. The court appointed five public defenders on Oct. 25. Legal representation is mandatory for Park’s case.

The five public defenders were present at the hearing but said they had never met their client. “We have sent three letters to meet with her,” Cho Hyun-kwon, one of the lawyers, told the court. “But the detention center informed us that she politely rejected our requests.”

“We will do our best to represent her,” Cho said. “We will also continue requesting a meeting with her.”

It was the first time that the names of the five public defenders were made public. After appointing them, the court said they would remain anonymous until a hearing took place.

Park’s team is the largest group of court-appointed lawyers representing a single client in Korea’s history. One public defender is named in ordinary cases, but the court said it assigned five because of the complexity of the case. Park’s case involves over 120,000 pages of investigation reports.

The five public defenders have varied backgrounds. Cho is the most senior on the team with 31 years working as a lawyer. He is a specialist in environmental cases. Others are specialists in criminal trials and the most junior of the team, Park Gil-seung, has six years of experience.