Pittsburgh Pirates infielder Kang Jung-ho has been released by his Dominican Winter League club, sources said Monday, casting another cloud over his once-promising career marred by a drunk driving conviction. 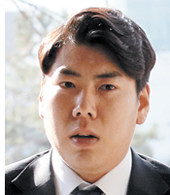 Sources close to Kang said the club has parted ways with the slumping player, who batted just .143 with a home run and 10 RBIs in 24 games. Kang also tied for the team high for errors at third base.

Kang signed with Aguilas Cibaenas in August in the hopes of reviving a stalled career with some winter ball action. Kang missed the entire 2017 major league season, as he was unable to secure a U.S. work permit following his DUI conviction.

The 30-year-old received an eight-month jail term, suspended for two years, in March, three months after leaving the scene of a DUI accident in Seoul. He lost his appeal in May.

The Pirates placed Kang on the restricted list, which is for players who are unable to play for non-injury reasons, such as arrests or family matters. Kang will not be paid or earn major league service time while on this list.

Kang, a former All-Star shortstop in the Korea Baseball Organization (KBO), finished third in the National League (NL) Rookie of the Year voting in 2015 after batting .287 with 15 home runs and 58 RBIs in 126 games. Last year, the Korean had 21 homers and 62 RBIs, along with a .255 batting average in 103 games.

Earlier this month, Pirates’ general manager Neal Huntington told MLB.com that he was hopeful of Kang’s return to Pittsburgh, but the club was also prepared for the possibility that he would miss more time.

“We’re still remaining open-minded in that situation. A year removed, will the [visa application] process be different? Will there be a different viewpoint taken on it?” Huntington was quoted as saying. “We hope so, because he’s a good player. While we have a lot of work to do on why he’s in this situation, we believe we can help him and we believe [he] can help us. We’ll get to a point in the offseason where we’ve got to plan without Kang, then if he is able to get into the country, that’s a bonus for us. If he doesn’t get in, then we haven’t lost anything.”