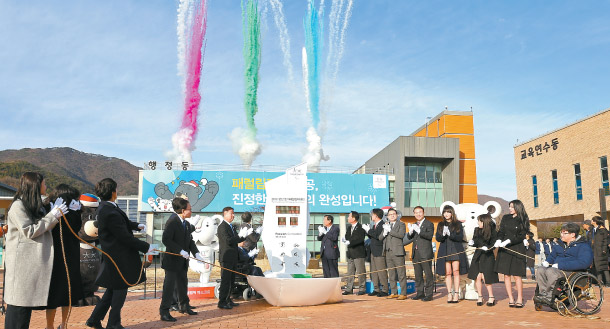 The 100-day countdown clock to the 2018 PyeongChang Winter Paralympics is unveiled in a ceremony at the Korea Paralympic Committee Icheon Training Center in Gyeonggi on Wednesday. [YONHAP]

The countdown to the first Winter Paralympics in South Korea reached 100 days Wednesday, with the host eyeing a top-10 finish at the multisport competition for disabled athletes.

Pyeongchang, an alpine resort town some 180 kilometers (111 miles) east of Seoul in Gangwon, will host the Winter Paralympic Games from March 9 to 18 next year, under the slogan “Passion. Connected.”

The event follows the Winter Olympic Games, scheduled from Feb. 9 to 25.

The Winter Paralympics will take place at the same venues as the Winter Olympics. The opening and closing ceremonies, as well as most snow sports, will be staged in Pyeongchang, while alpine skiing events will be contested in Jeongseon, some 215 kilometers east of Seoul.

Gangneung, a coastal city in Gangwon, will host all ice sports during the Paralympics.

The PyeongChang Organizing Committee for the 2018 Olympic & Paralympic Winter Games (Pocog) estimates some 50 countries will send about 1,700 athletes and officials to take part in its Paralympics. They will vie for 80 gold medals at stake in six sports.

However, it’s still doubtful whether countries like Russia and North Korea can participate in the PyeongChang Paralympics. Russia is currently dealing with a state-sponsored doping scandal, while North Korea has yet to make any notable movement to compete south of the border.

The North doesn’t even have an athlete registered in the International Paralympic Committee (IPC) database. South Korea is hoping for North Korean participation in the Winter Games to ease tensions on the Korean Peninsula.

South Korea aims to finish inside the top 10 with four medals - one gold, one silver and two bronze medals - at the Winter Paralympics at home. The country has so far collected only two silver medals in seven Winter Paralympic Games and has yet to win a gold medal.

With the home-field advantage, South Korea should have a great opportunity to pick up medals at the PyeongChang Paralympics.

South Korea is looking to compete in all six sports and a maximum 39 athletes are expected to compete, helped by 50 coaches and officials, the largest number in the country’s Paralympics history. At the 2014 Sochi Paralympics, South Korea sent 27 athletes.

The South Korean national team for the Paralympic Games was officially launched last month and athletes have been following training regiments. The Korea Paralympic Committee (KPC) said high-tech facilities and equipment have been used to help athletes, while researchers from the Korea Institute of Sport Science also joined to help them.

“We want to achieve our best-ever Paralympics performance in Pyeongchang, so that we can meet the people’s expectations and pave the way for disabled sports in South Korea,” said Bae Dong-hyun, who will serve as chef de mission for the South Korean Paralympic delegation. “We will try to collect four medals, including one gold, to finish inside the top 10.”