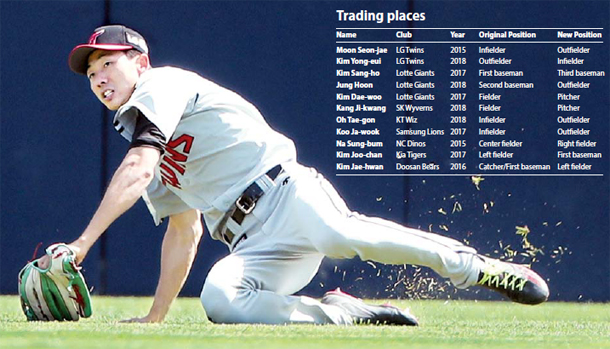 Kim Yong-eui of the LG Twins during a KBO game against the Doosan Bears at Jamsil Baseball Stadium on May 7. [KIM MIN-KYU]

The Lotte Giants didn’t hold back this off-season, investing heavily to secure the best fielders in the KBO. The club’s eagerness to bag the biggest name has left them in a tricky spot, however, as they now have one too many right fielders. 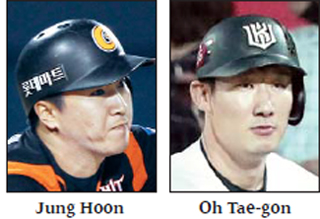 But the Giants aren’t the only team to find themselves in this position. Every season, KBO clubs have players that change position for different reasons. It may be due to the addition of a new player or it may be to give younger players a chance.

Kim Moon-ho, the Giants’ left fielder, is likely to spend a lot of time on the bench this season as Jeon Jun-woo and Min Byun-hun compete for the spot. This isn’t the first time the Giants have made such a change due to the addition of a new player - Kim Sang-ho had to move to third base when Lee Dae-ho returned last season.

Position changes can be seen as an opportunity for younger players. In the KBO, there are a number of players that have strong offensive play but are weaker in defense. As a result, the clubs assign the players to less important positions so they can gain experience and expand their defensive range.

Not only that, such changes are made to veteran players to allow them to only focus on batting. The KBO’s top two veteran players - Kim Tae-kyun of the Hanwha Eagles and Lee - have now made their transition to first baseman and designated hitter, but when they first started they were both third basemen.

Similar changes are made for the pitchers, as the managers assign the younger pitchers to the bullpen before becoming a starting pitcher, to gain more experience.

Position changes are expected to be made in all ten KBO clubs during the offseason. Jung Hoon, the former second baseman who lost his spot to Andrew Burns of the Giants, is training to be an outfielder. Not only that, Kim Dae-woo of the Giants and Kang Ji-kwang of the SK Wyverns will change their positions completely, from fielder to pitcher.

Kim started as a pitcher in the futures league last season. He used to be a pitcher but due to a shoulder injury, he switched position to be a fielder. As he couldn’t settle as a fielder, Kim will make another attempt at pitching next season.

Though a position change seems like a small thing, it can be very difficult for a player to change their approach and skill set in time for the new season. When an infielder becomes an outfielder, they have a hard time determining the landing point and the ball speed.

At the beginning of the season, Koo Ja-wook of the Samsung Lions struggled significantly, missing a number of balls as he misjudged where they were going. Unlike infielders, where they general catch the ball with their feet planted firmly on the ground, outfielders are required to make catches whilst on the run.

The same applies when players change position, even if they are staying on the same part of the field. If a player is more comfortable as a shortstop, they find it difficult as third or second baseman because the relatively static position and rapidly changing direction of play is difficult to follow. Second basemen have to twist their body and throw. Since they have to connect with the shortstop, second basemen are required to make fast decisions.

Though there aren’t that many KBO players that have gotten in the starting lineup after a position change, Kim Jae-hwan had seen some success. Kim originally joined the KBO as a catcher but is now the Doosan Bears’ left fielder and a slugger. During Kim’s career as a catcher, he struggled to leave an impression and continuously went back and forth from the KBO and the futures’ league. In 2015, he made his first position change to first baseman and in 2016, he had a turning point in his baseball career as an outfielder.

In addition to Kim, Na Sung-bum of the NC Dinos and Kim Joo-chan of the Kia Tigers played well at first base in the 2017 season. They were given more playing time, but didn’t maintain their position throughout the season.