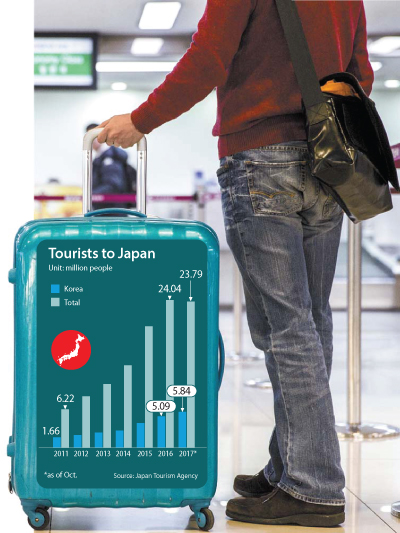 The number of Korean tourists heading to Japan has risen dramatically, largely thanks to more national holidays, cheaper plane tickets and the strength of the Korean won over the Japanese yen.

According to data from the Japan Tourism Agency, 5.84 million Koreans visited the country during the first 10 months of this year. The figure is a 40 percent increase year on year.

Last year’s record of 5.09 million Koreans visiting Japan was broken in September. By the end of this year the number of Korean visitors to Japan is likely to surpass 6 million, which means one out of eight Koreans made the journey this year.

The biggest booster for the growth in demand was the unusually high number of national holidays in Korea this year. The government has been designating extra days of holiday to bridge gaps between existing days or when an official holiday fell on a Sunday for a few years now. This year, the Chuseok holiday, which is officially only three days long, was as long as 10 days for many people. The government intended to invigorate the local economy as people usually spend more during holiday periods. Most Koreans had a different idea, however, and the number of people traveling overseas skyrocketed to the highest level ever. Japan and Southeast Asian countries, which are not very far from Korea, were among the most popular destinations.

Transport data accumulated by the Ministry of Land, Infrastructure and Transport shows 1.23 million Koreans headed overseas during the Chuseok holiday season from Sept. 29 to Oct. 9. Among them, 320,000 are estimated to have visited Japan. Korean visitors to Japan have been gradually increasing from 2.76 million people in 2014 to 4 million in 2015.

Cheaper plane tickets to Japan also contributed to the trend. The growing number of low cost-carriers (LCCs) taking customers to various cities in Japan has slashed travel prices. Korea’s largest LCC Jeju Air expanded its regular service routes to Japan to eight, including a new service to Kagoshima, at the southwestern tip of Kyushu Island, scheduled to launch on Jan. 6. Eastar Jet starts a new service to Miyazaki, also located on Kyushu Island, from this month. Jin Air recently started promotions on tickets to Japan as competition to pull in customers increases.

According to data from the Transport Ministry, LCCs carried 67 percent more passengers headed to Japan in July and August this year compared to the same time last year. Full service carriers Korean Air and Asiana Airlines, on the other hand, saw performance dip by two percent on services to Japan.

“Tour packages to Japan have been diversified due to the rise of LCCs,” a spokesperson from Korean Air said. “Cities like Fukuoka, which Koreans could visit for a day trip, are highlighted as popular short-distance travel destinations.”

As flight tickets become affordable and younger travelers are on the rise, tour packages centered on visiting famous restaurants and shopping arcades are increasing. It is a deviation from the past, where Koreans usually visited hot springs and golf courses.

The deterioration in geopolitical relations between Korea and China also played a role, as more Koreans headed to Japan instead of China. The unusually strong won over the yen was also a factor -on Dec. 5, 100 yen was valued at 964.1 won, the lowest since late 2015.

Japan is a hugely popular destination not just for Koreans, but also for tourists from all over the world. A total of 23.79 million foreigners visited Japan this year through October, already narrowing the gap with the record 24.04 million that traveled there last year.

The growth in tourism was a priority for Prime Minister Shinzo Abe, who has highlighted the tourism industry as one of a core factor to support the country’s future.

Japan’s tourism account, calculated by subtracting Japanese’ spending abroad from foreigners’ spending on tourism and shopping in Japan, was 842.9 billion yen during the second and third quarters this year, a 25 percent increase year on year. The first time Japan recorded a surplus in annual tourism was in 2015.

Korea is moving in the other direction. An increasingly large number of Koreans are heading overseas, while the number of tourists traveling to Korea is falling. According to figures from the Bank of Korea, the country’s tourism account deficit reached $13.92 billion from January through October. Geopolitical conflict spurred by the deployment of the U.S.-led Terminal High Altitude Area Defense antimissile system and threats including numerous nuclear tests from North Korea haven driven tourists away.